↓ Skip to Main Content
Home › Testing the van lifestyle! › Beyond to Wales – Part 2

Beyond to Wales – Part 2 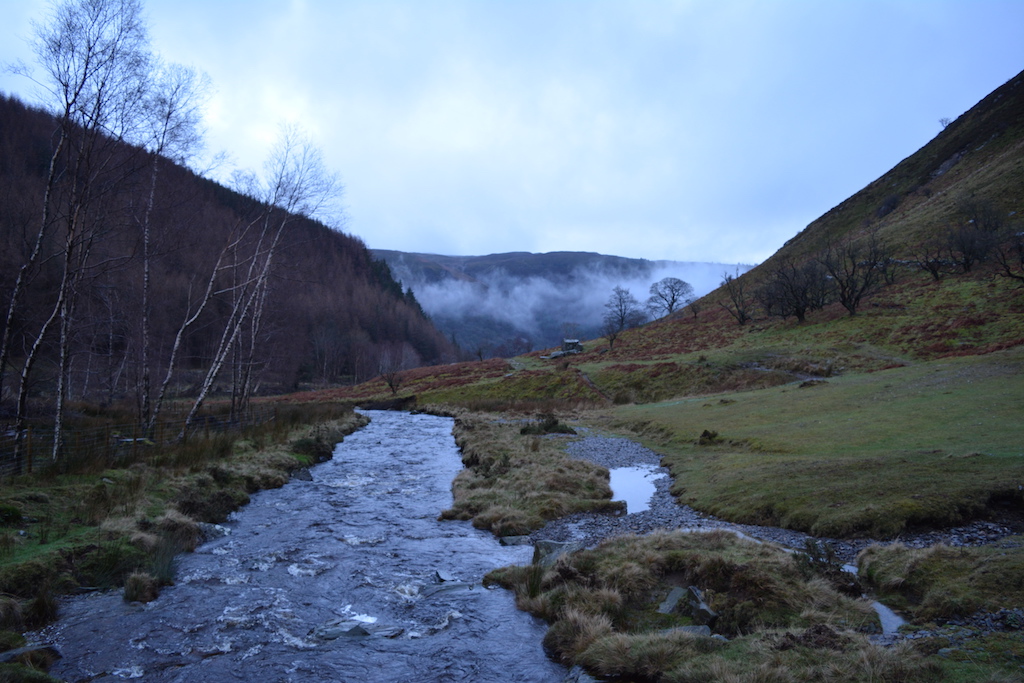 We spent most of New Years Day perfectly content parked up in our spot in Elan Valley. It was mostly a lazy day, Kirsty had her book and I had the internet (this is more the reason we stayed here for most of the day!). Mid afternoon we headed off on a road to nowhere. Which basically meant we had no clue where we were going. All we knew is we needed to fill up the water, get some logs and food. 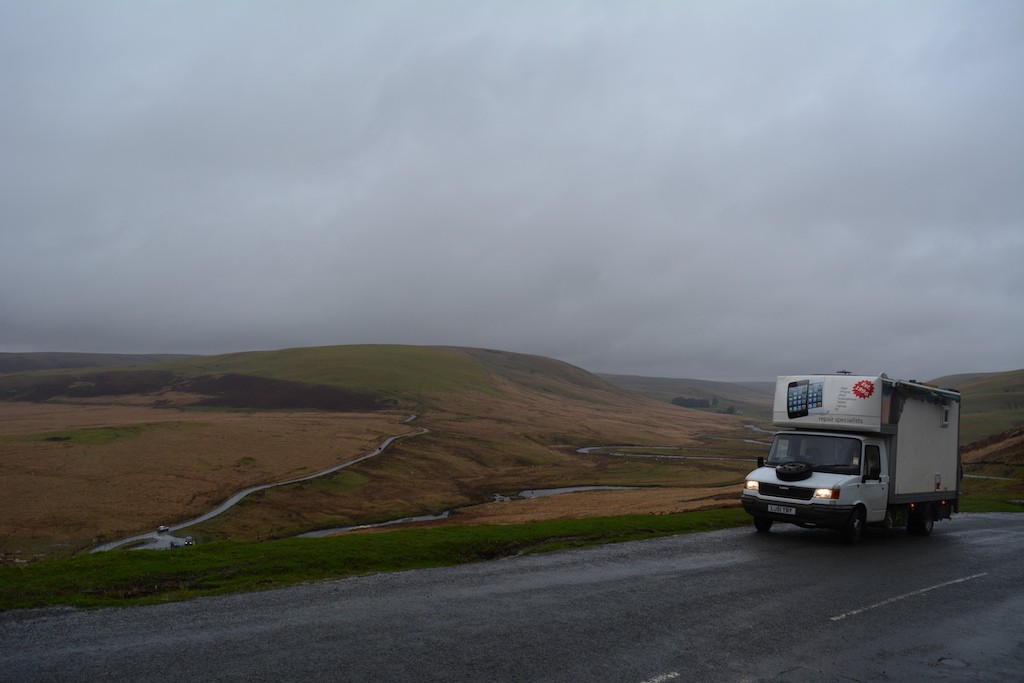 We said goodbye to Elan Valley, as we took the mountain road to Rhyader, then on to Aberystwyth. 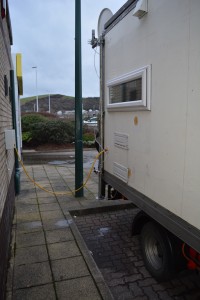 Quick stop at Morrisons for some food, logs and water and we were set. Ready to find our retreat for the night. On to Borth…

One of my favourite Beaches has to be Ynyslas. Mainly because you can drive straight on. Possibly not in a 4.5 Tonne campervan though… but we’ll see!

Yes, I drove straight on to the beach. Of course I did. Then lost my nerve so, without stopping, continued to a nice flat area of stones and read the “no motorhomes” and “no overnight staying” sign. Great place to put the sign, once you’re well on the beach! Time to leave perhaps!? We drove back off the beach without and problems. Having four rear wheels saved us as the ruts we left behind were a good six inches deep!! We headed back towards Borth where we had previously spotted two motorhomes parked up for the night along the sea front. 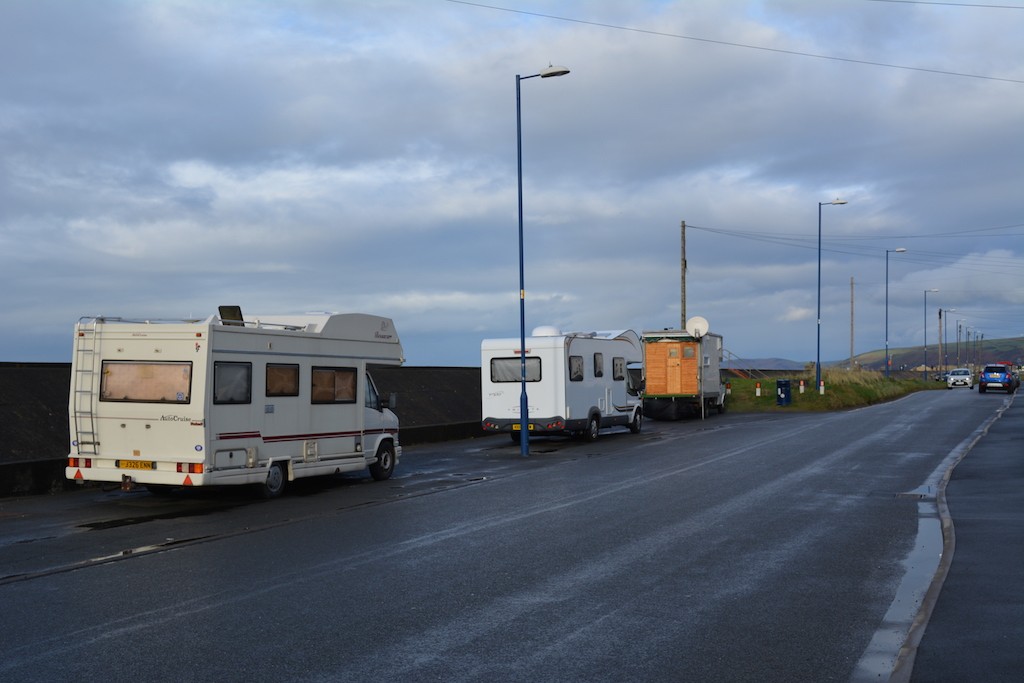 We parked up with them and set up home for the night. The logs from Morrisons were rather damp and we’d run out of kindling. It was cold out. Cold, but dry. After a quick brainwave, I headed over the wall to the beach with a bag and filled it with twigs. We once again had a roaring fire. 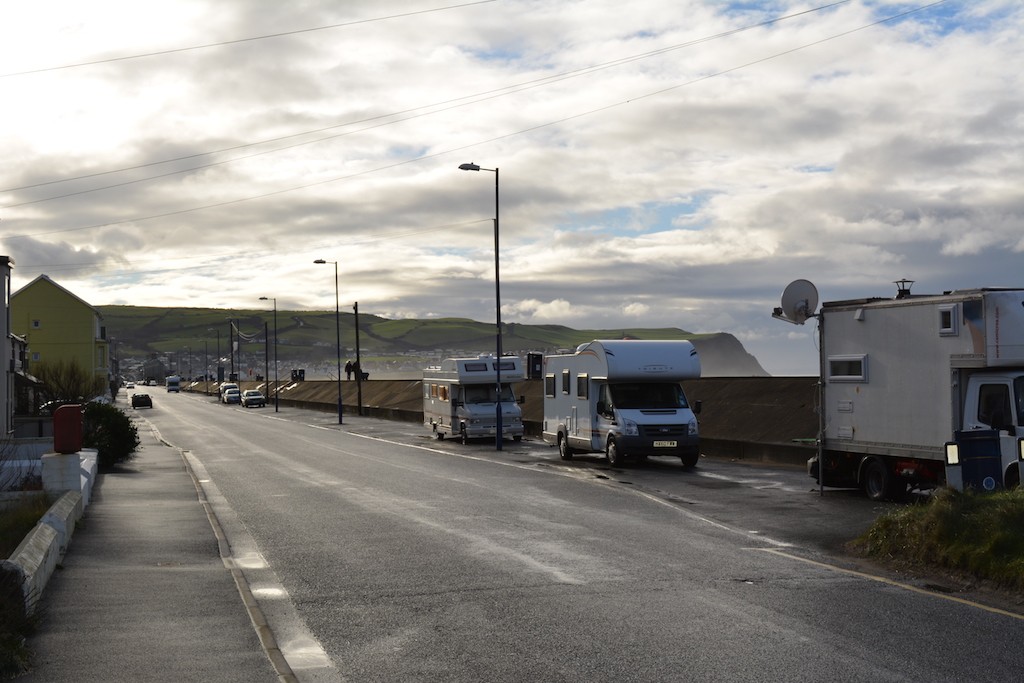 We had a good night sleep and a lie in the following morning before calls to home, leisurely packing up and an obligatory walk on the beach. 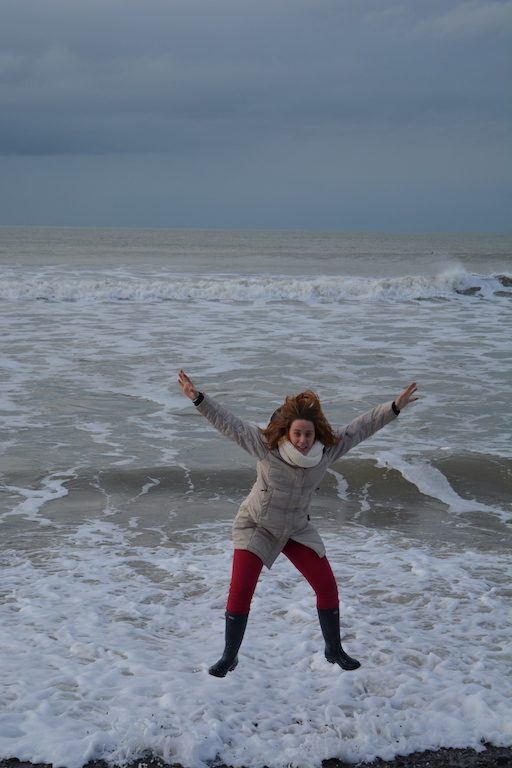 Remember that local lunatic from a previous post? She turns up everywhere… 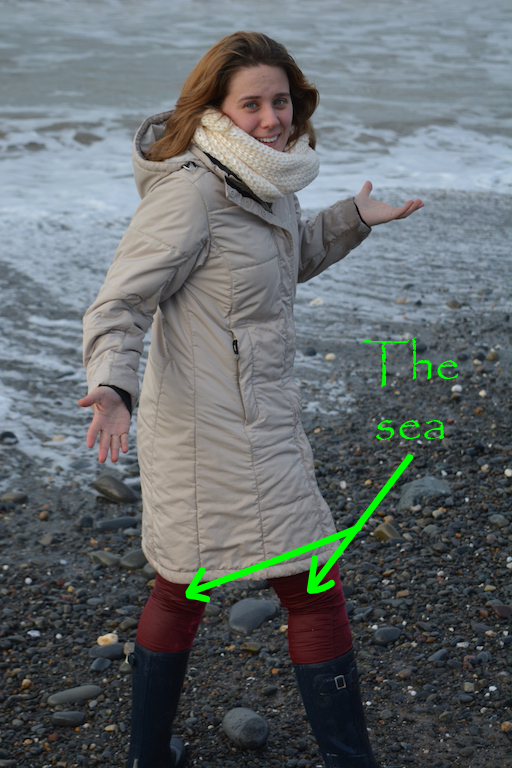 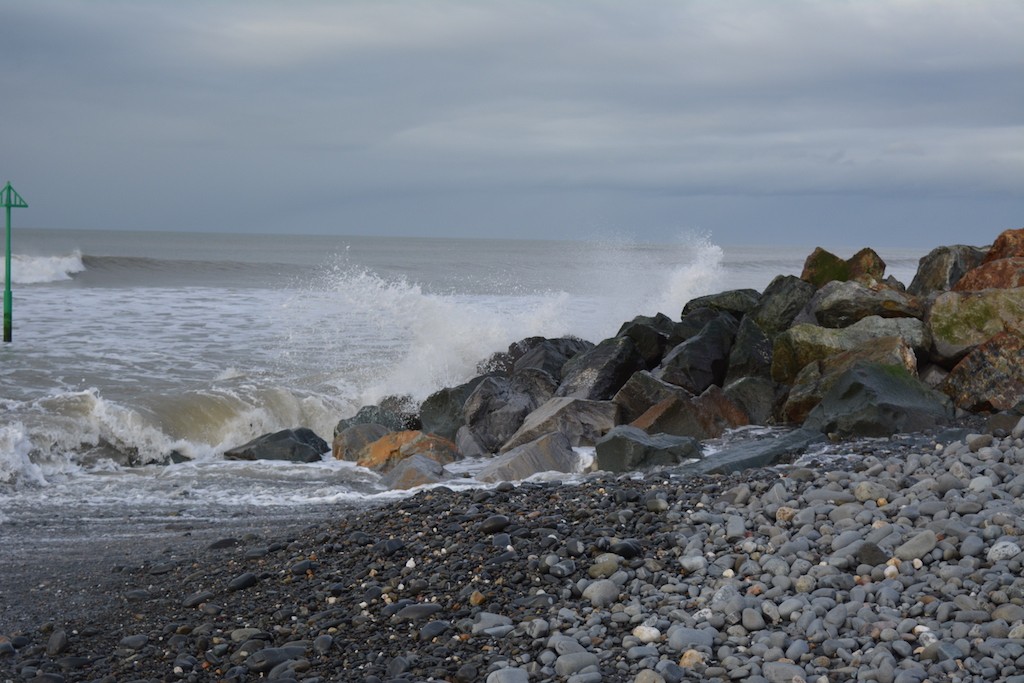 The weather was mild and the sea was choppy! Pretty good for January! 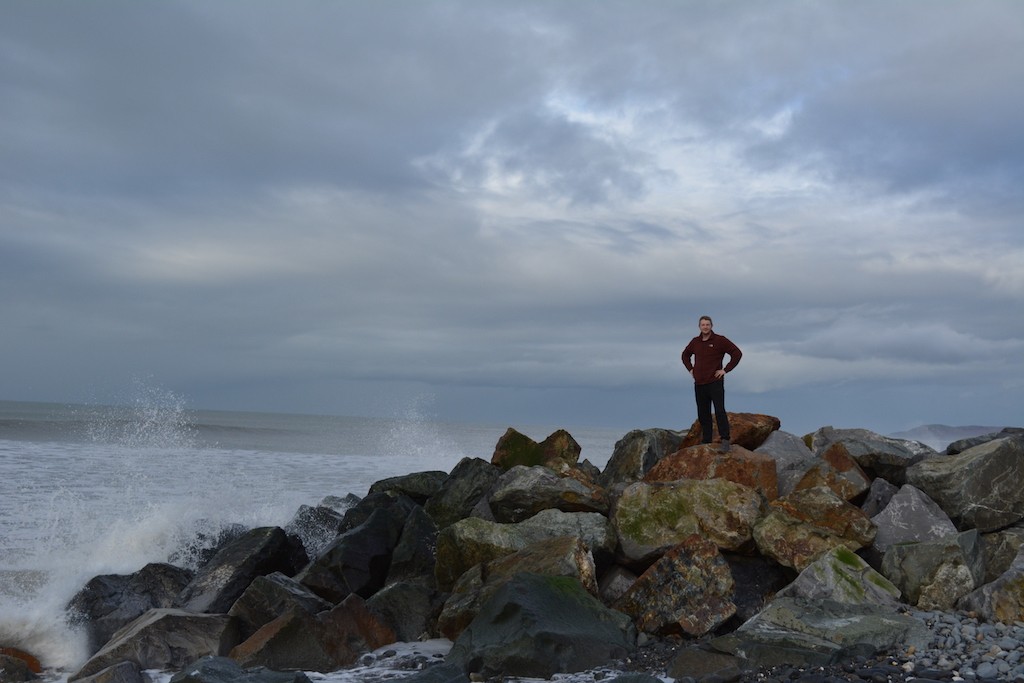 And I had more sense than to do an action shot as the sea came in. As you can see, I arrived dry, and left… dry! 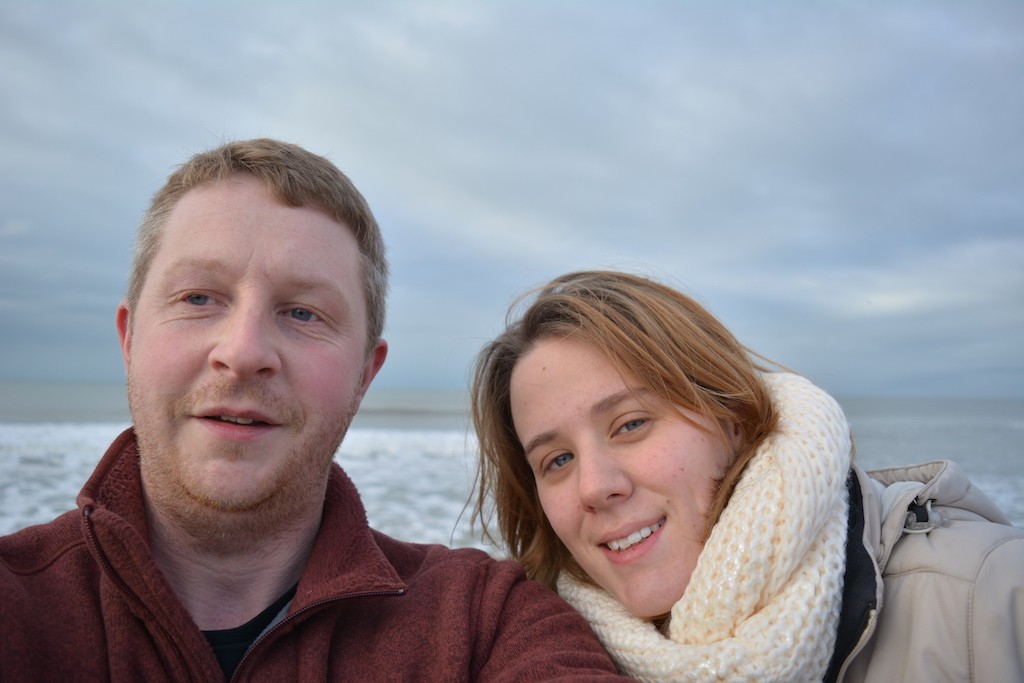 Selfie before we head off. Yes, I always look at the screen instead of the lens. Don’t ask.

Our favourite area so far has been Lake Vyrnwy so we decided to head back there for the last weekend of this trip. Via the faithful Morrisons tap in Aberystwyth of course.

En route, we pulled into a petrol station to let some long suffering cars go past us, and although they did have kindling for sale, the garage appeared abandoned and was closed. So we stopped there for lunch and got our kindling from the next garage. 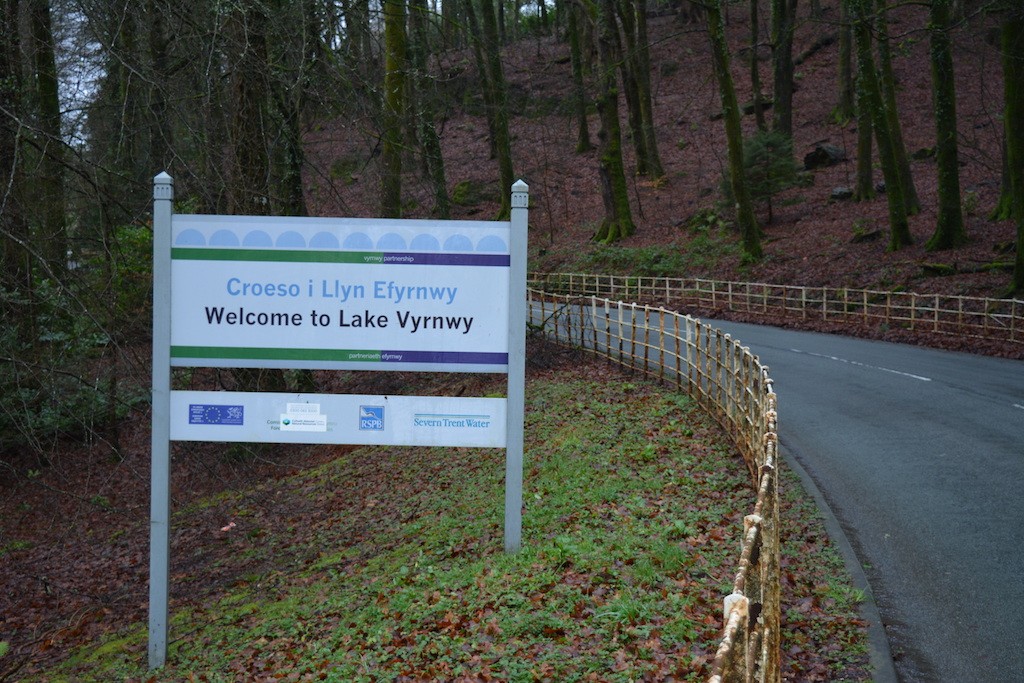 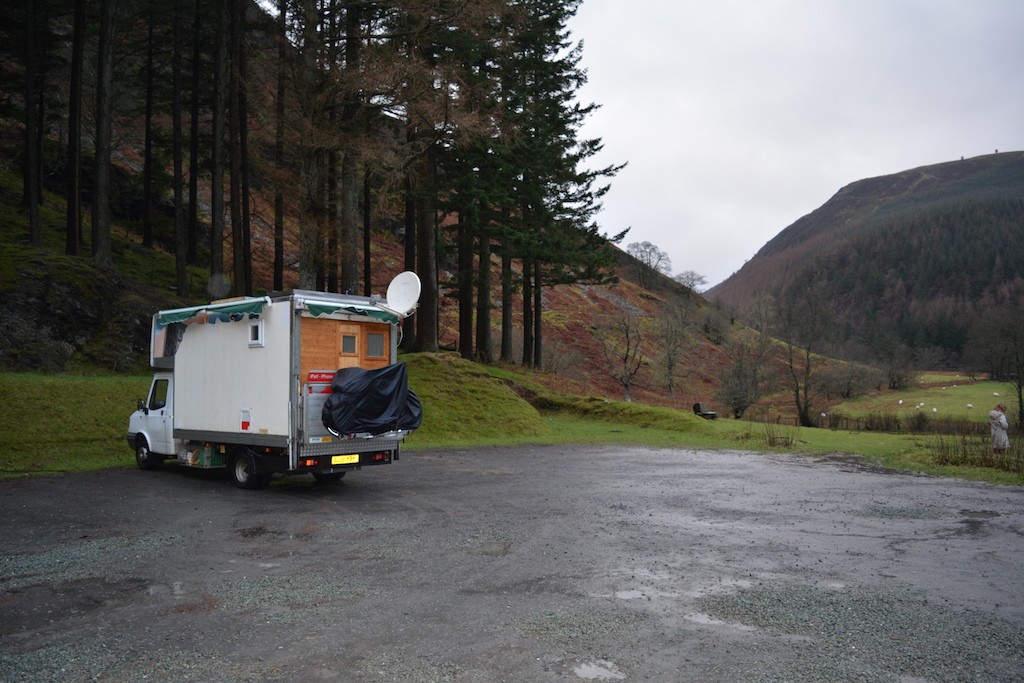 Well, hello to the car park, also known as our home for the night.

As soon as we arrived, we headed off on foot to find the waterfall. 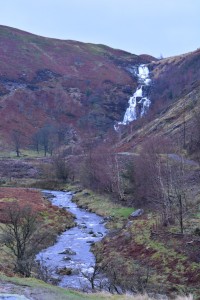 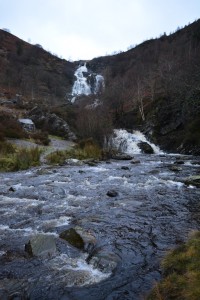 It was a muddy trek to find it and quite a way from the car park. Delightful scenery and friendly sheep on the way! 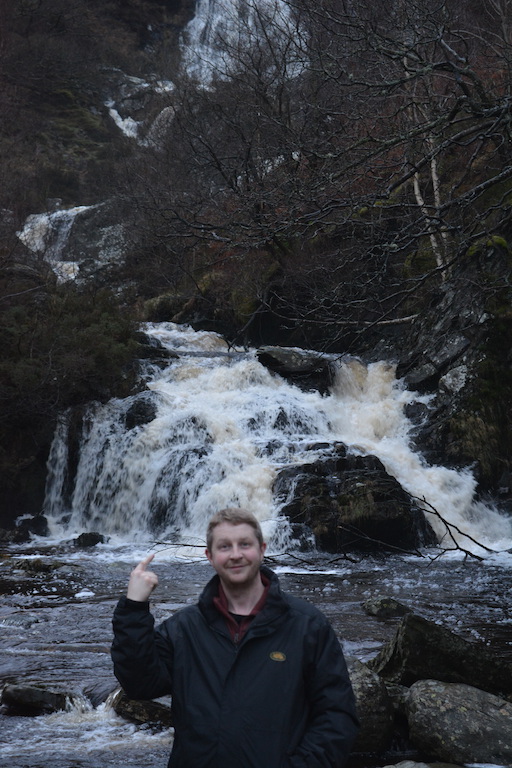 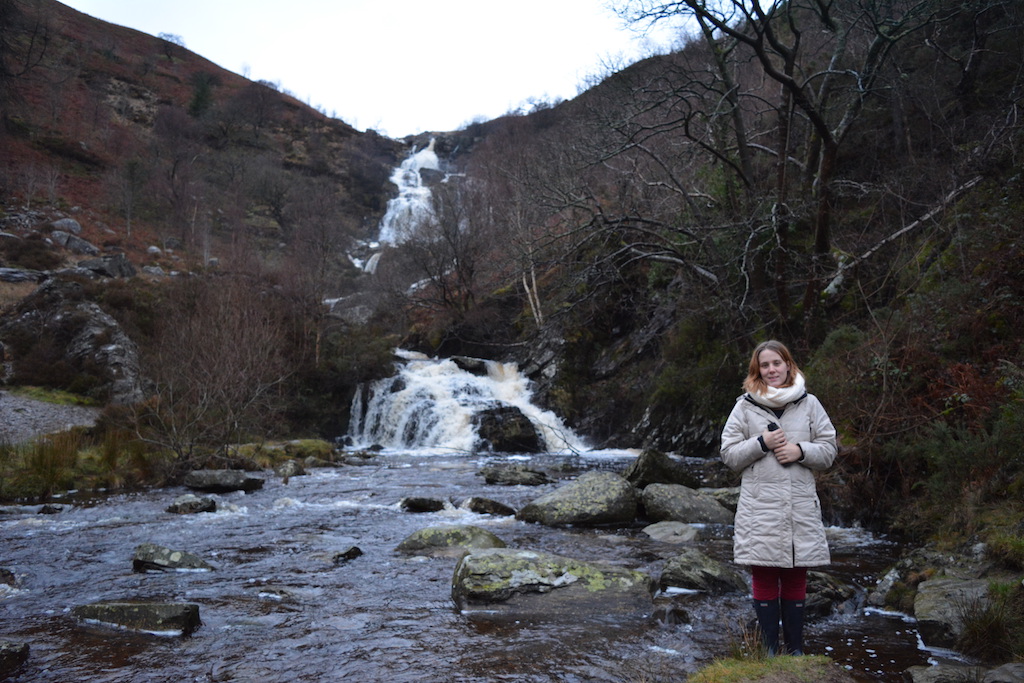 We found it. Pretty impressive waterfall! 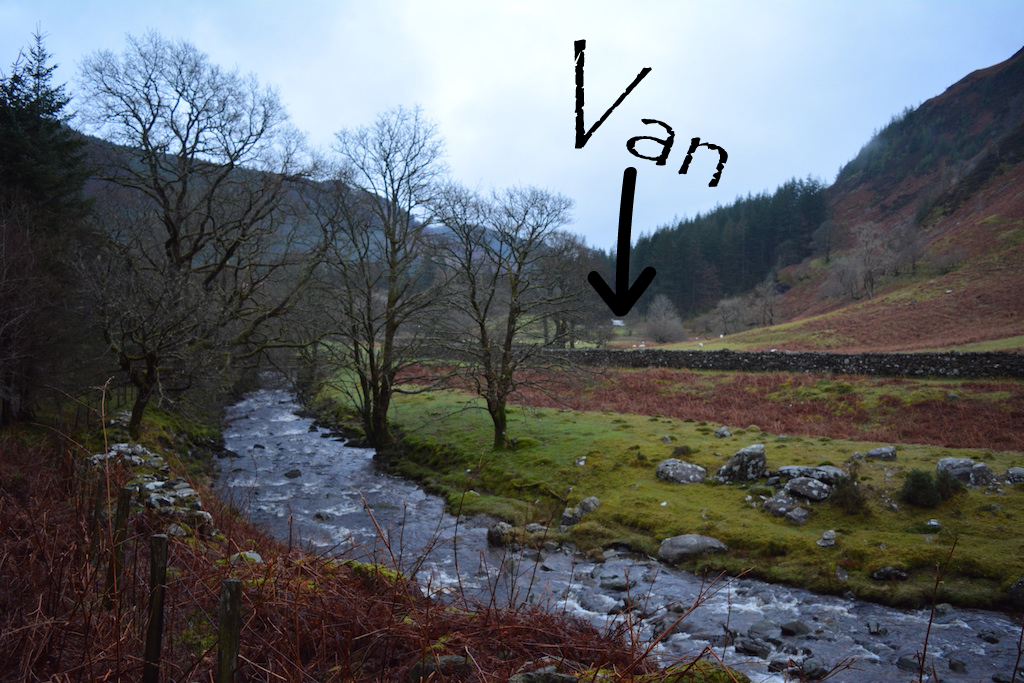 Then headed back to the van… eventually.

Fire lit and ready for an evening of… no satellite. There’s a problem: trees. Lots of them and very tall. I tried for a while to position the van where I could beat them but ultimately, they won. 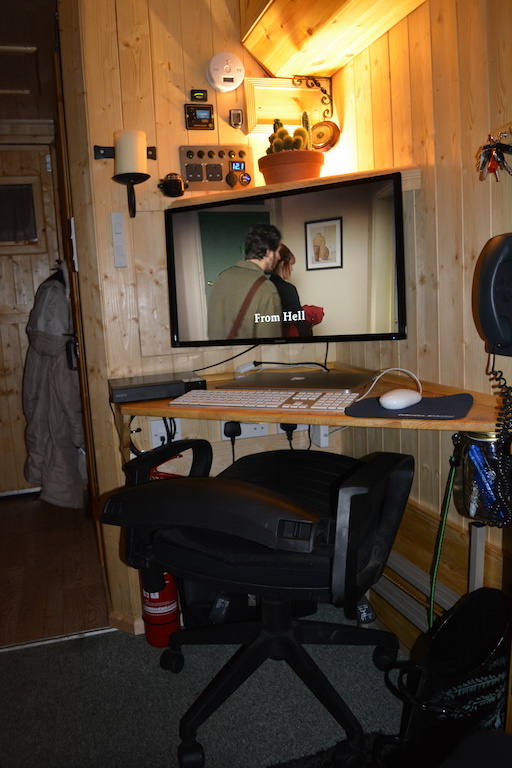 Looks like tonight is going to be an evening of The IT Crowd on DVD. Have you tried turning it off and back on again?

The night was peaceful and we’d never known anywhere so dark to stay the night! Although we’d only spotted literally a handful of cars coming and going throughout the morning and nobody had bothered us, we decided to park up in a different area of Lake Vyrnwy for our last night here. The rain hammered down but it didn’t stop a few photos being taken en route to our new spot – via Welshpool. Yes, we needed food and a tap! Not to mention a battery charge so the 50 mile round trip was worthwhile! 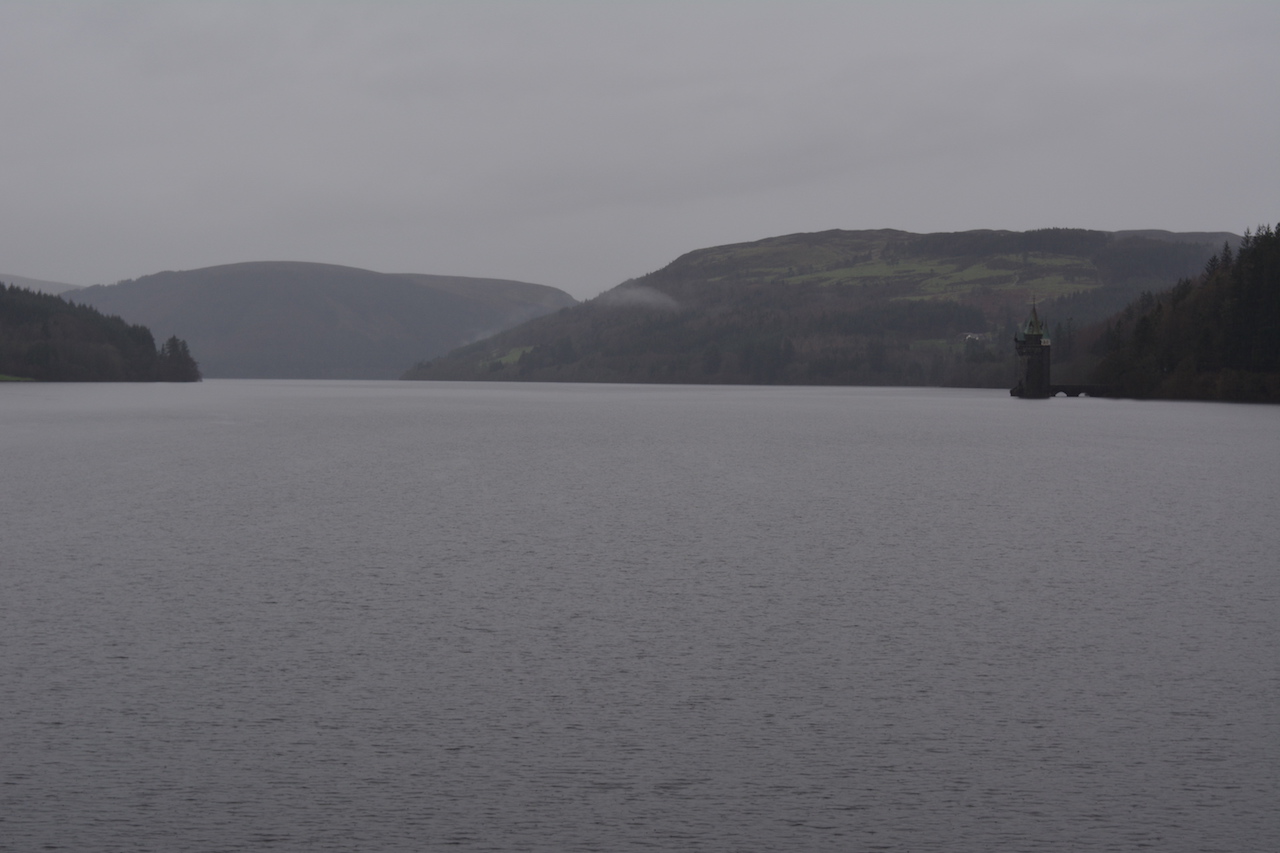 Photos of this place really don’t do it the justice it deserves. Well, not with me taking the photos anyway! 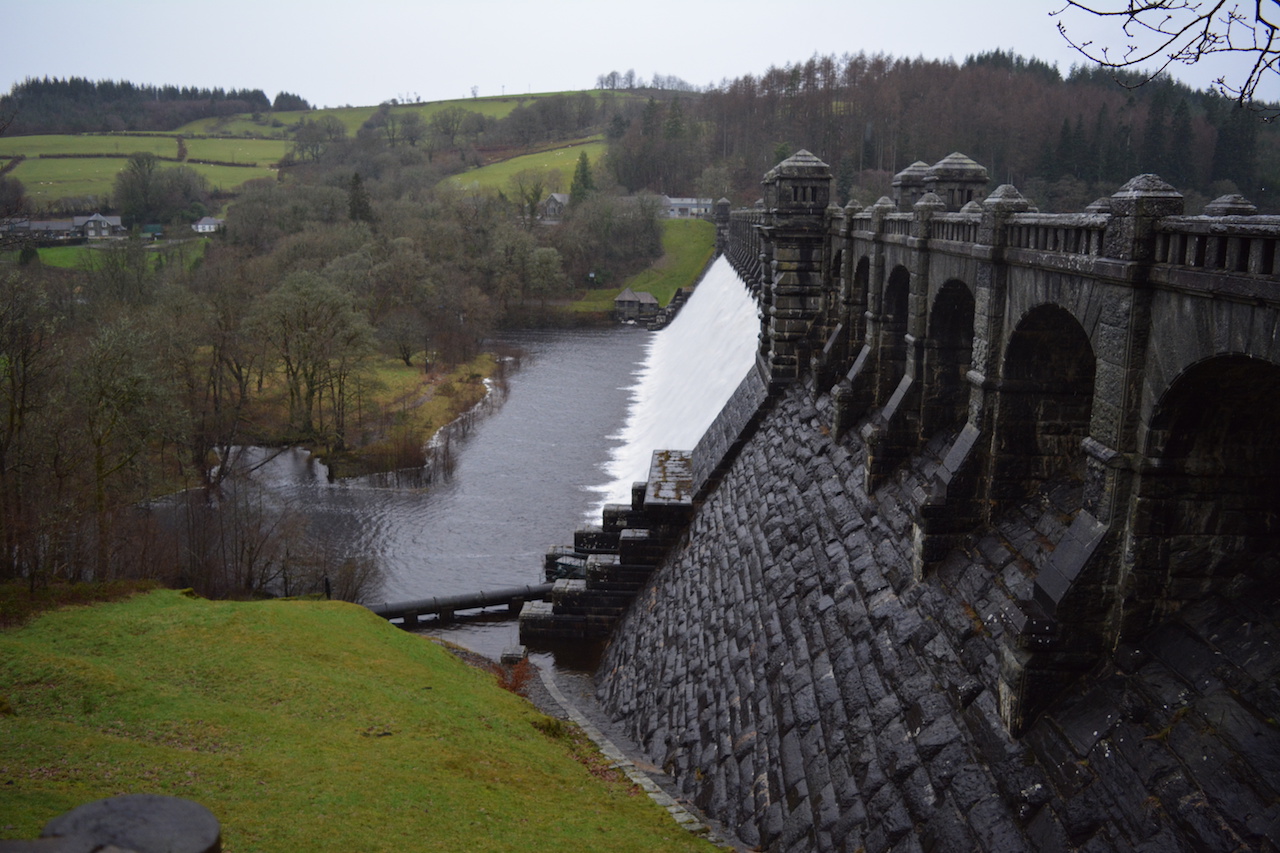 And so on to Welshpool to get the ingredients for tonight’s chicken roast, and of course fill up the water tank. 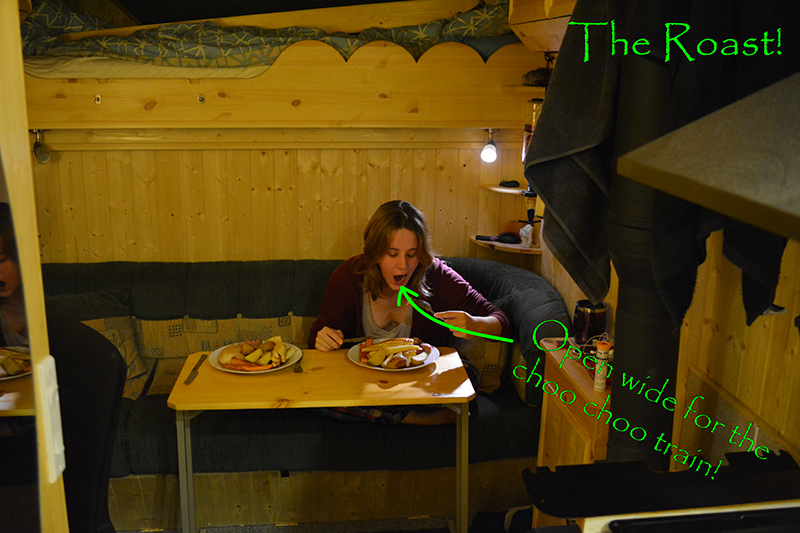 For our last night, we decided to park up in the exact same spot as our first night. Just because we can!

It’s been an awesome trip around Wales, we’ve seen some amazing countryside, seaside and… rain. The van trial has been a huge success and so far we’ve not stumbled upon anything that needs modification for living in here. It’s now Monday, our day to travel back.

We didn’t get much use out of the bikes on this trip, mainly down to weather. However, what we did find is that the bikes on the back of the van don’t hinder us at all. The tail lift is obviously heavier with them on there, but that’s much easier (and more secure) to manage than taking the bikes off each time we park up! 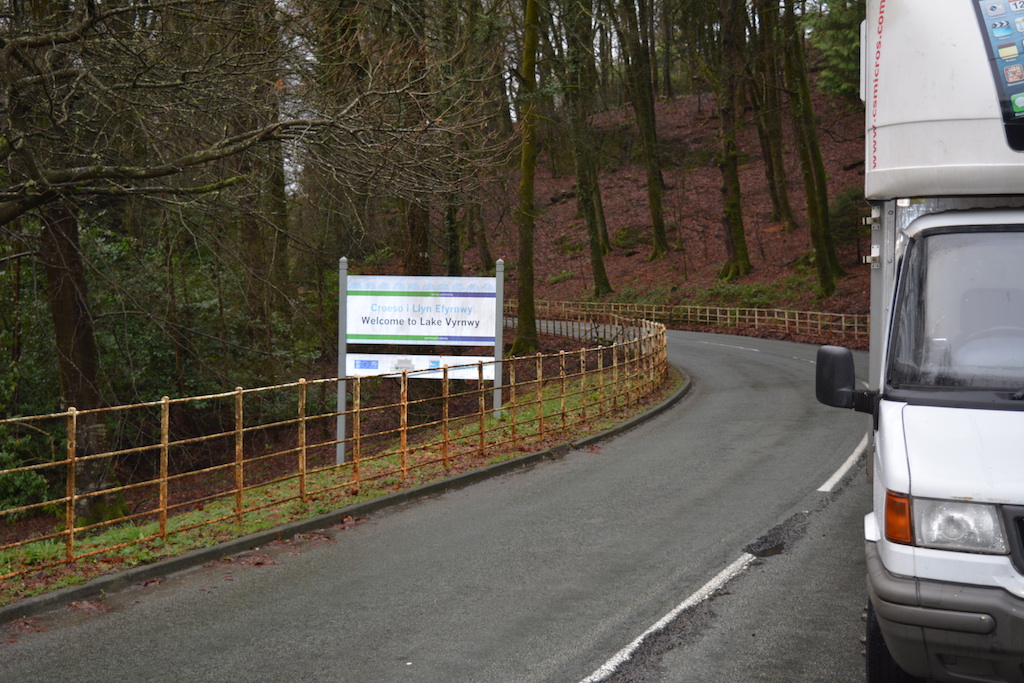 The time has now come  to say goodbye for now, Lake Vyrnwy. We will definitely come back. 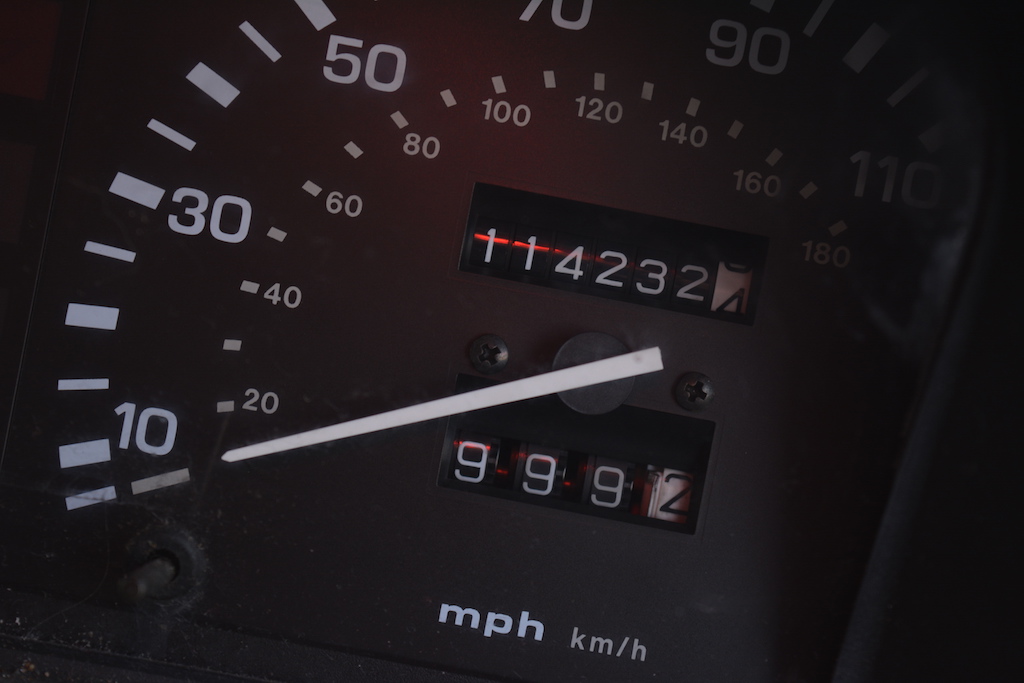 As we returned back to base, we just turned the 1000 miles mark. The van as performed superbly (apart from the screeching alternator belt for five minutes every morning!) and we have every confidence it will continue to do so around Europe. Once the belt is tightened; it’s apparently a known trait with these 2.5 TD Ford engines?!

We aim to head over the pond in February, which gives me less than four weeks to tweak the van:

I’ll do some blogging throughout January, but it’ll be more along the lines of what I’ve done to the van, what I’m doing to the van, and anything else I can think of to help other people who are converting their own vans. Any questions, please do ask in the comments and I’ll do my best to share what I’ve learnt so far, or even better, wite a blog to help.

Feel free to subscribe to our blogs, then you’ll get a quick email when new ones appear – thanks to everyone who has already subscribed, it gives me great incentive to continue sharing our adventures!

Other things we’ve learnt this trip…