Not the surprise I hoped for… 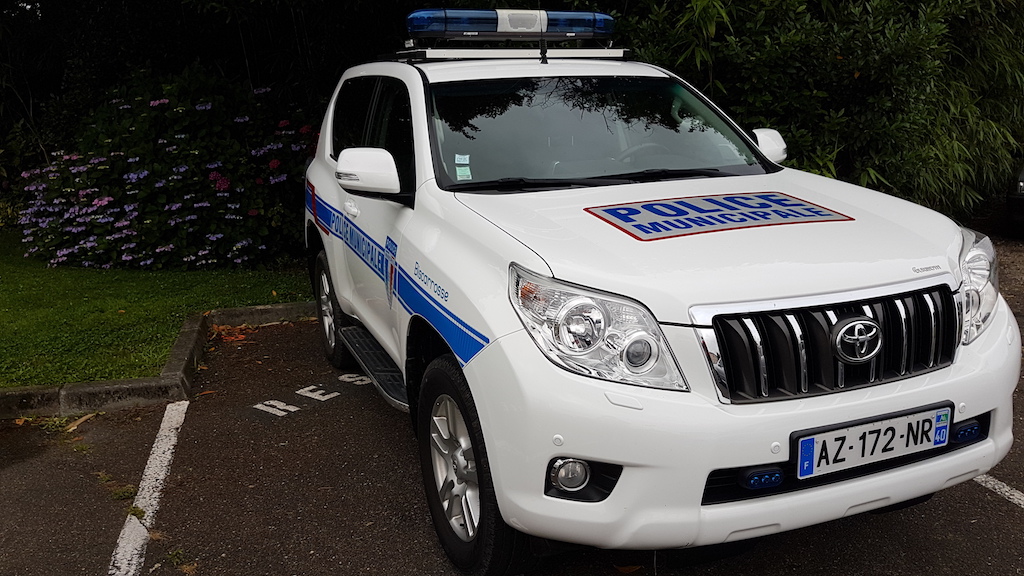 Having previously thought the French just like to laugh a lot, it turns out that my version of “I speak a little French” actually translated to “My French is very little garden pea”.

Which when you think about it, still gets the intended message across! 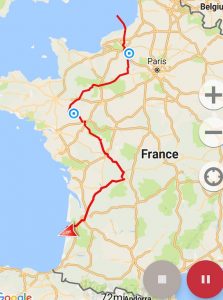 Having arrived late to the sand dunes, I spotted what looked like a good night spot. There were a couple of other vans already there. My wake-up view would be a surprise the next morning. 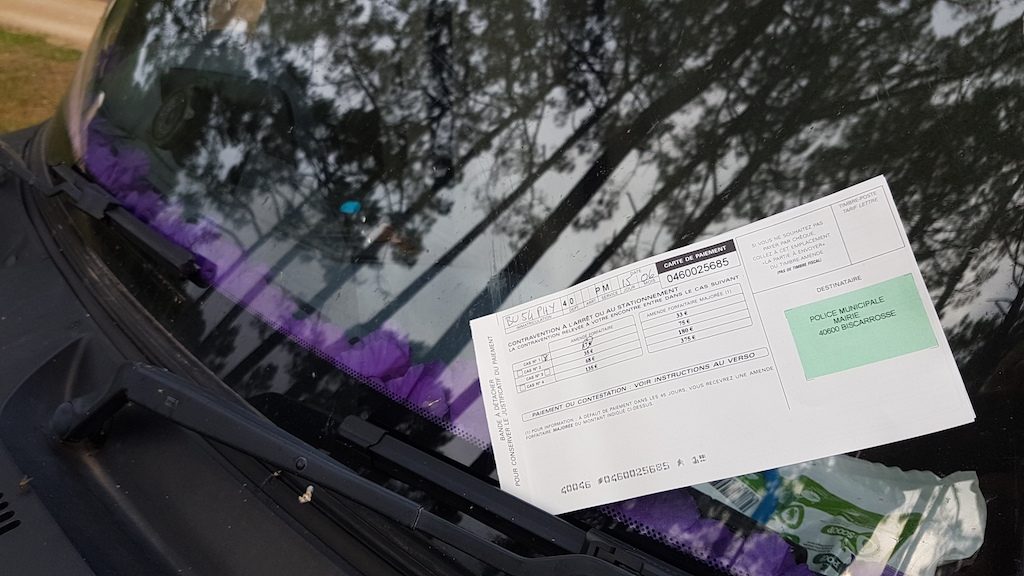 Not the kind of surprise I’d either hoped for or expected though!

After sending a photo of the parking ticket to my friend Amy who speaks fluent French (and fluent just about every other language too) via WhatsApp she translated it to say it’s because I was sleeping in my van in an area that doesn’t allow it. That’ll be €17 – thank you very much. 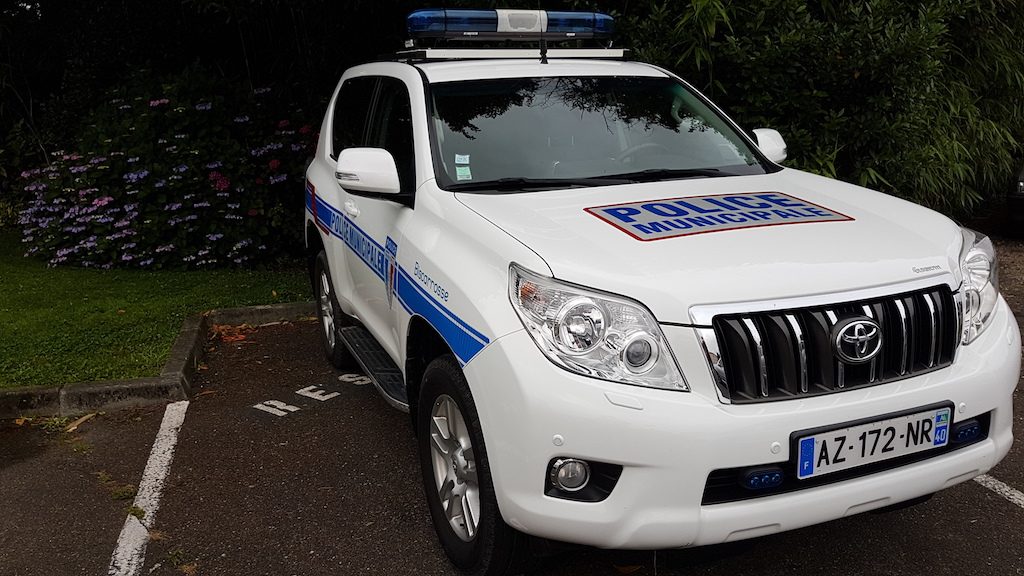 My default response to parking tickets, and any other kind of fine, is file it in the bin. However, I do quite fancy spending more time in France later in the year and I’d rather not be wondering if every police car on the road is going to pull me over for my camp site money!

So after a bit of advice from Amy, I did as she suggested and decided to pay it. Afterall, a camp site on the beach would cost more than €17 anyway. 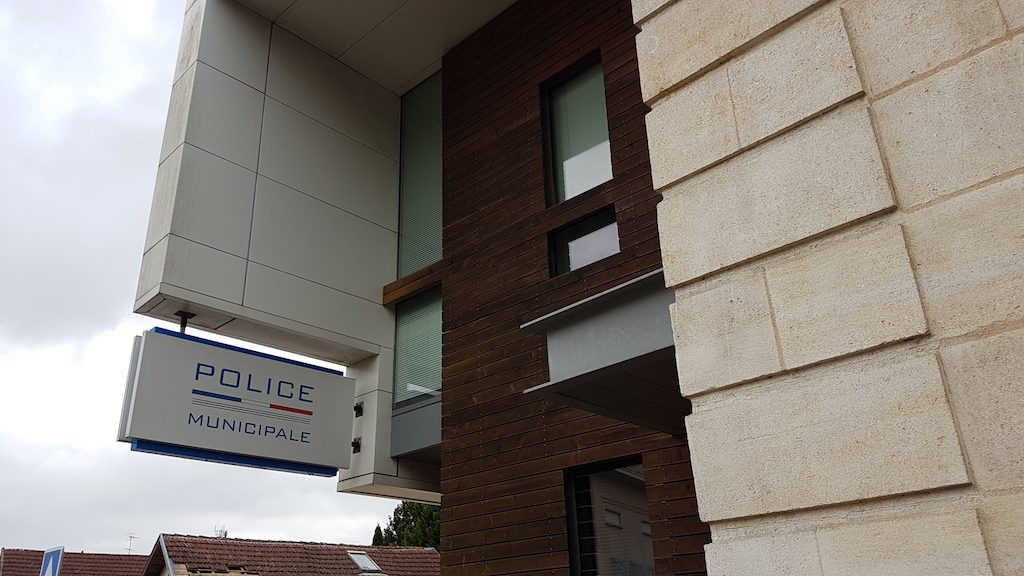 That morning I had planned to head for the dune. Instead, I headed for the local cop shop.

I don’t think they actually take cash payments for parking tickets, but it was simply easier for them to take my €17 and stamp my receipt than it would have been to try and explain to me the “official” way to pay. Either way, I’m all paid and don’t owe the French any more money.

Apart from the few speed cameras that flashed me en route, but I won’t worry about those. In an LDV, a speeding ticket should be framed with pride.

We arrived at the official parking spot for the dunes to find they wanted paying. No chance. One thing I never do is pay to park in a car park – anywhere. A quick ‘U’ turn and I found a rough patch of land and a nice French man who told me “Bonjour free free park” – That’ll do me nicely!

We followed a small track through some trees to find the most enormous sand dune I had ever seen. I haven’t seen many, so that’s not hard, but I doubt I’ll see one bigger than this regardless! 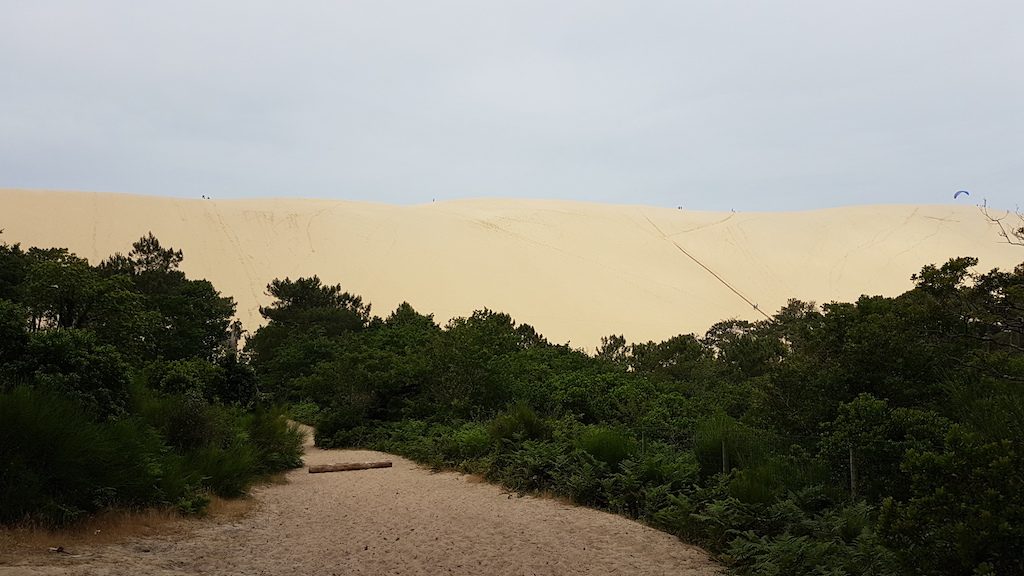 Ted and I started climbing. Five minutes later, I was still pretty near the bottom. Why is it when you want your dog who normally pulls like a train to actually pull, he doesn’t?

After around 25 minutes of seriously hard (for me!) climbing up pure, dry sand, we got to the top. I was exhausted! 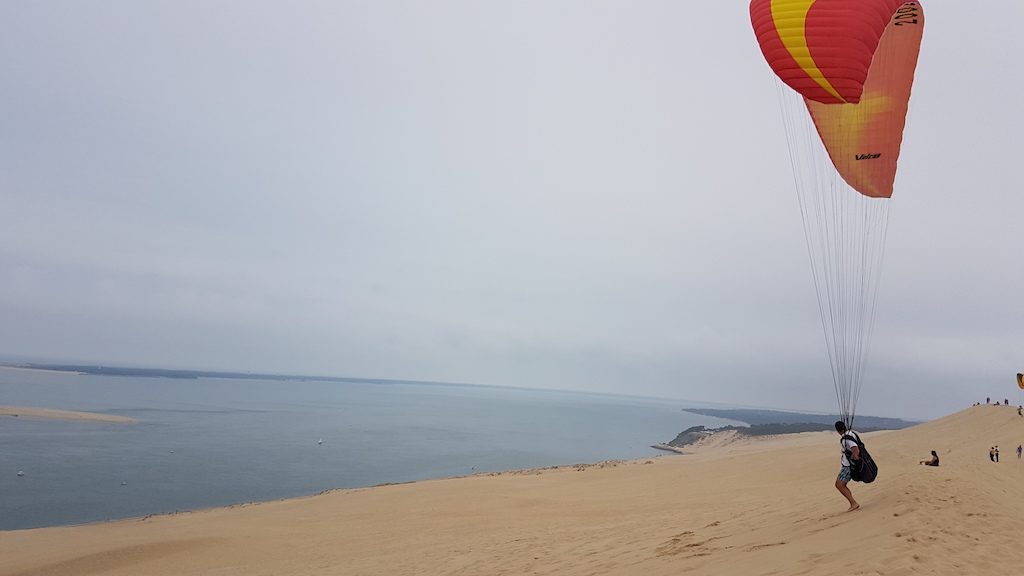 The views were pretty amazing! 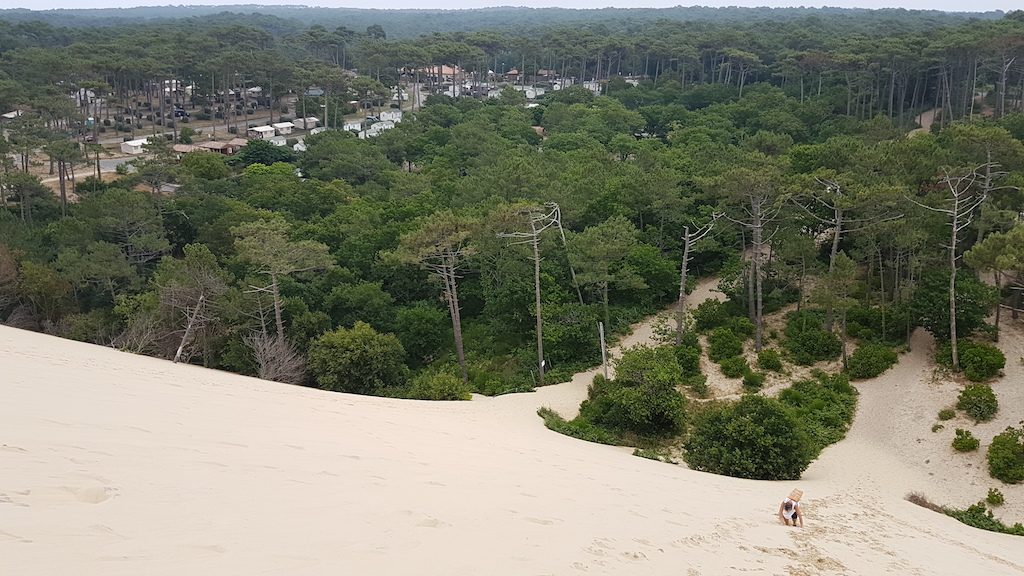 We spent quite a while just sitting at the top. Just watching and enjoying. 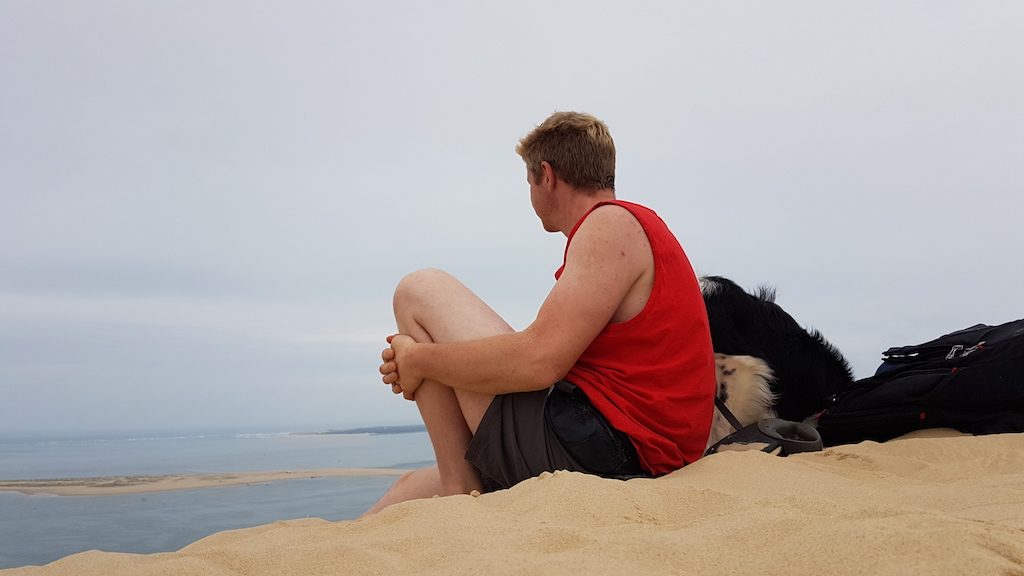 Then we ran all the way back down. Awesome. 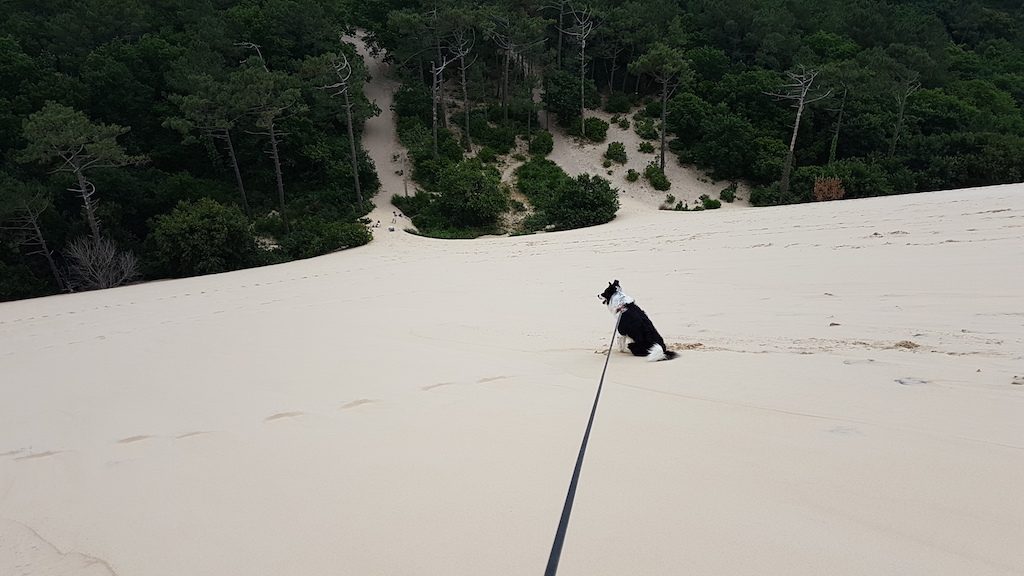 That afternoon, I decided to head off to a new area. It does seem this area of France is cashing in hugely on visitors and wild camping really isn’t allowed because the camp sites want our money. Therefore, we shall leave and spend no money here. 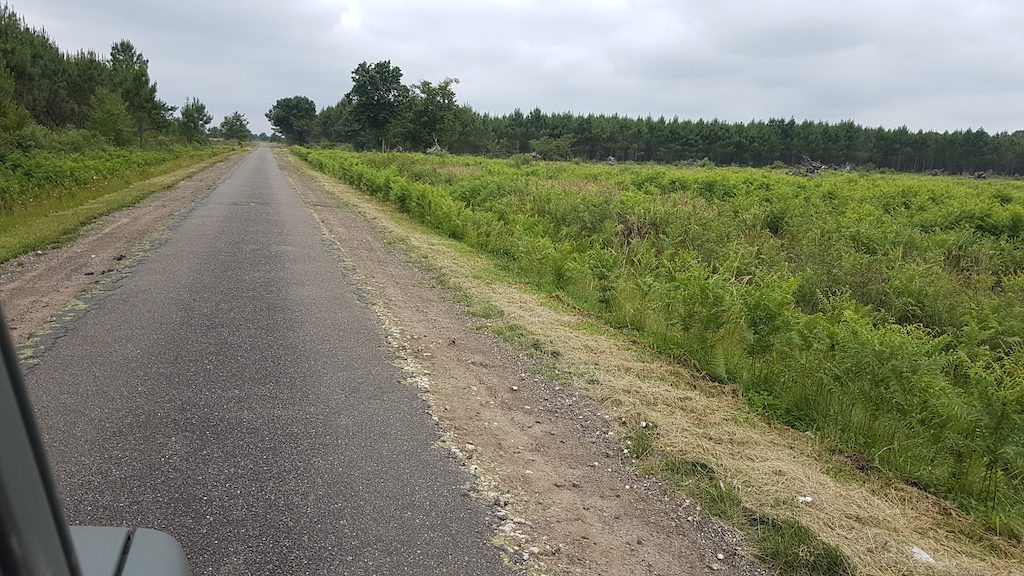 I will do some more videos soon… I’m trying to get the balance between enjoying the moment and capturing said moment… So far, enjoying and living the moment is winning! Afterall, that’s what I believe life should be about – living in the moment.

2 Comments on “Not the surprise I hoped for…”