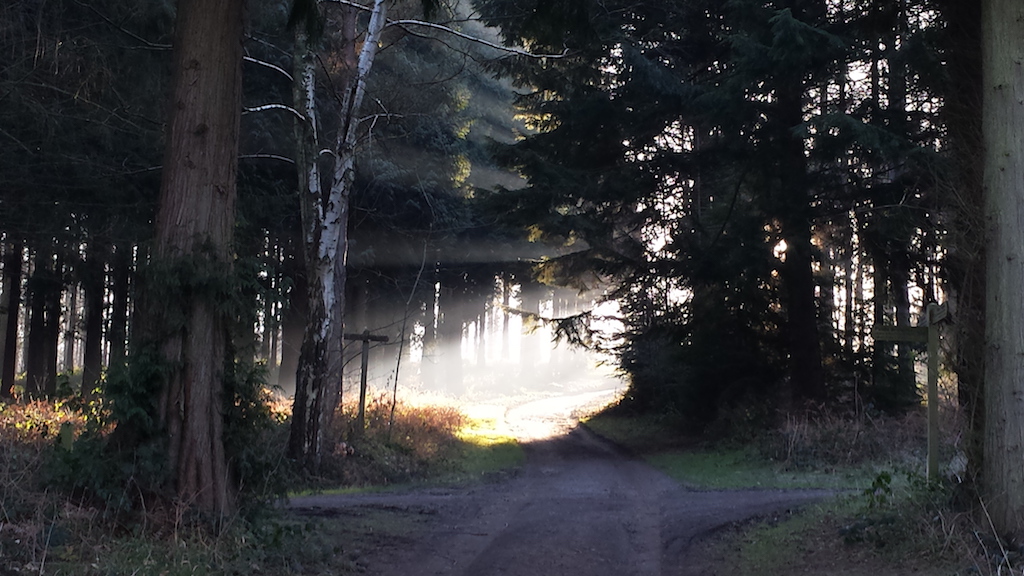 The majority of our February plans haven’t quite come to fruition. Saying that, it’s been a very interesting month!

We commence our travels to Portugal on 1st March and had planned to use February to get the the last little bits done on the van and sort out things at work. The field in which we were residing in Beyond needed us to vacate by the end of January. Doing our usual trick of not planning anything at all, I started the search for a new location just before we were due to move. This didn’t go so well.

My first port of call was to see a local farmer who I thought might be able to help, and he did. We arranged to park the van in his field for February.

We arrived and got the van completely stuck. This is not what I had in mind. When I say stuck, I really mean burried. Our monster Defender couldn’t even winch it out. This was a tractor job. Luckily there was one not too far away, just a case of sit and wait for it to come and help.

We had no choice but to leave, which we did once the tractor arrived. Being towed up and across a hill in a 4500Kg Luton van scared the living daylights out of me. I genuinely feared the van was going to tip over sideways. Thankfully, all went well and we made it back to the road.

No photos of this event I’m afraid, I was in too much of a panic! Must improve my photographing the moment skills for the blog….

By the time we were back on tarmac, time was getting on and we needed somewhere to park up for the night. I knew of a lay-by just off a dual carriageway not too far away, and after spending a copious amount of time convincing Kirsty that it will be safe, off we went. Sure enough it was safe and Kirsty slept like a log while I lay awake most of the night – typical!!

In the morning, we headed to a pub where we’d previously seen caravans parked up on the field behind. After speaking to the landlady, she kindly said we could stay there for as long as we needed for just £5 per night (including mains hookup!!) as long as we used the pub regulary. No hardship there!!! 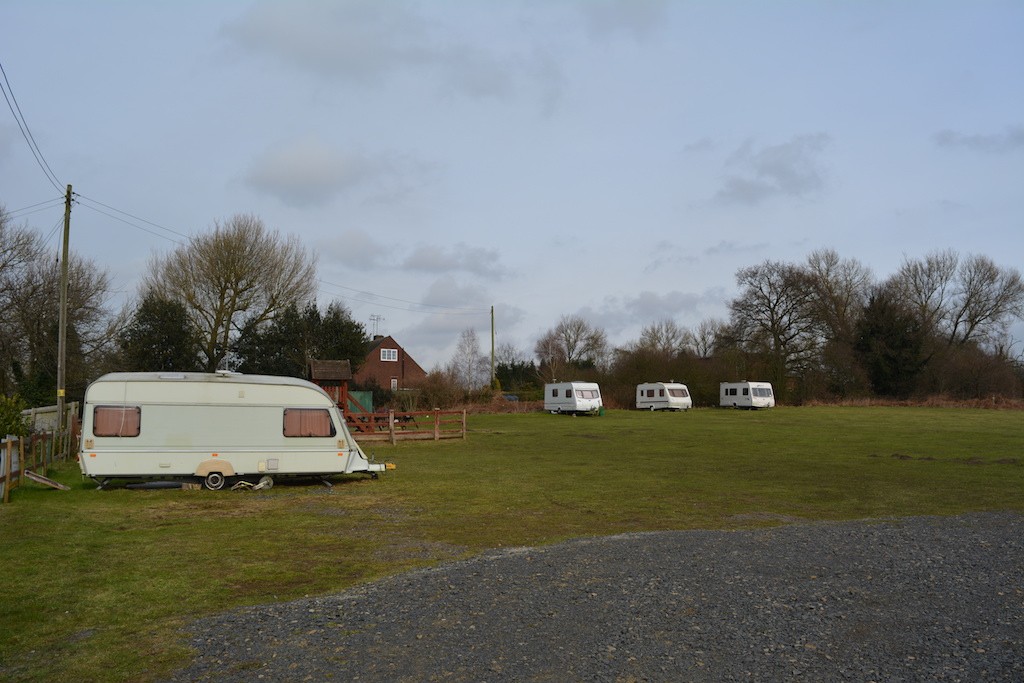 We had no problems driving the van up on to this field (this was a big relief!!) and we settled in well.

A lovely place to park up and a great price with really friendly people around. After a couple of weeks though, we deciced to move on. There’s only so much pub food you can eat… 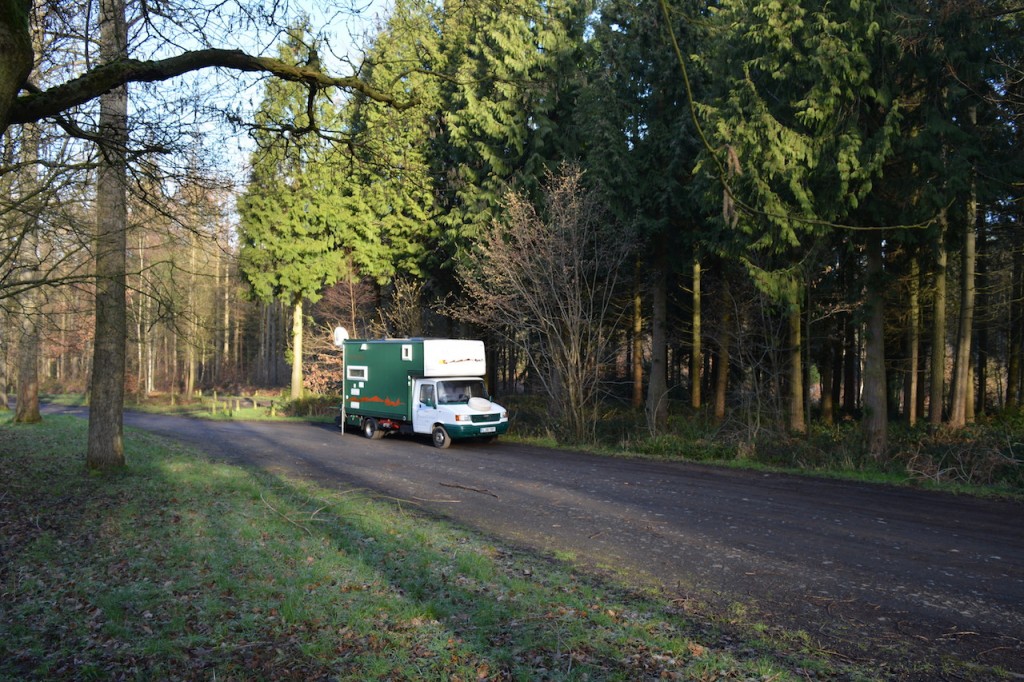 Our first search for a place to park up was a success. We found a beautiful lay-by (not mentioning it by name for obvious reasons!) near some woods and later in the evening, we headed over there in the van to settle for the night. 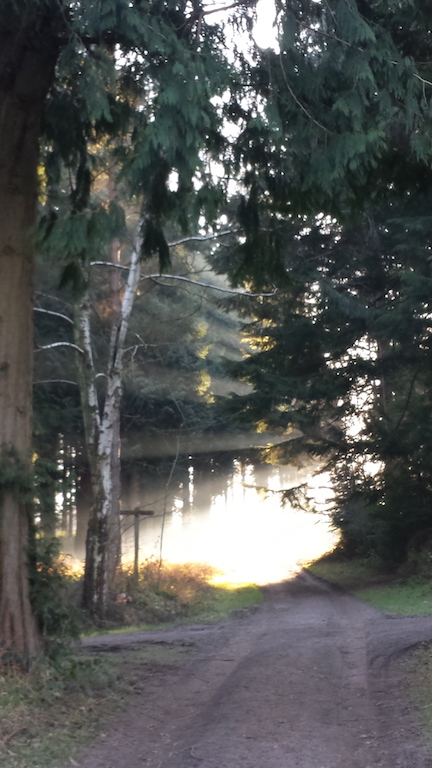 As we arrived, we spotted something unusual in the dark bushes; a bright white rabbit. A rabbit who didn’t run away when we pulled up, and not even when we walked up to it with a torch. This little thing was clearly not a wild rabbit! She let me pick her up and take her to the van! 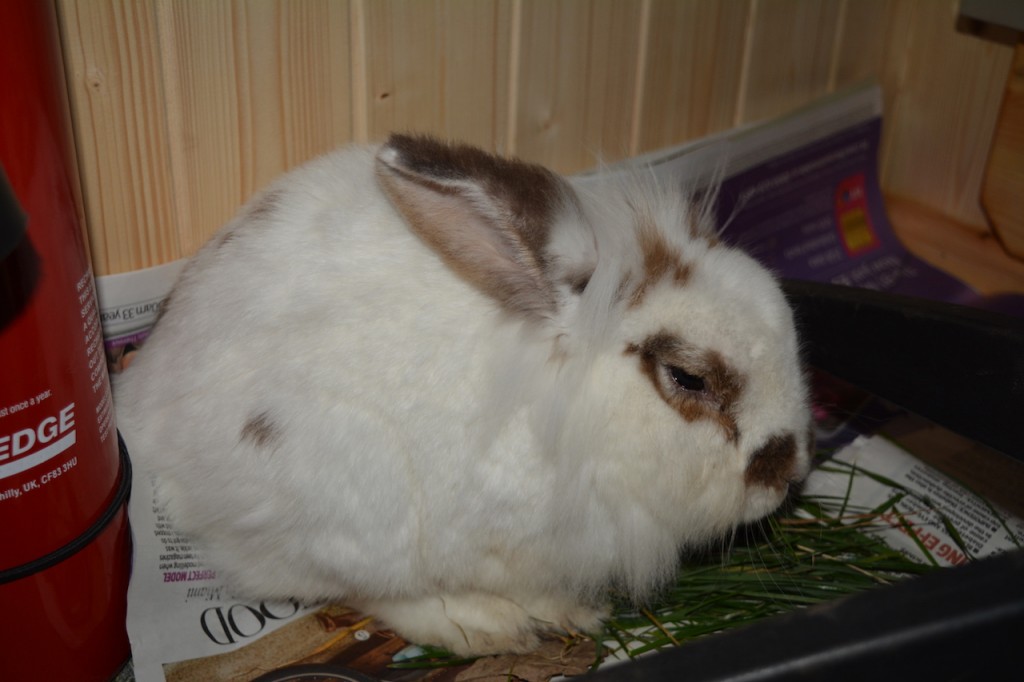 A delightful little bunny who had been abandoned on a freezing night in the lay-by. How anyone could do such a thing is beyond us. She was so friendly and very house trained. 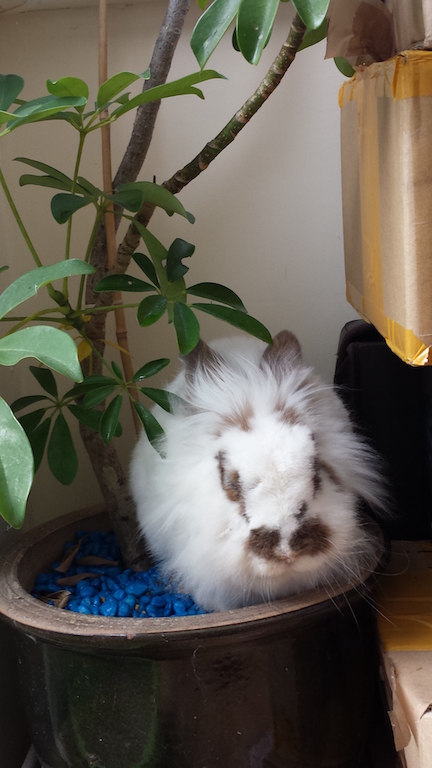 Coming from the same area, we also heard a cat and kitten meowing. The cat was easy enough to find and she was really friendly. She purred non stop and let me carry her almost out of the woods on two occasions before she jumped down and headed back, probably to find her kitten. She wasn’t thin and was quite obviously surviving in the wilderness. Our new rabbit friend stayed with us overnight and was as good as gold.

The next morning, a very pleasant couple, Nikki and Mark, who live not too far away pulled up next to us in search of a Collie who had been spotted abandoned. They asked if we’d lost a dog, to which said no but asked if they had lost a rabbit! Probably not quite the response they expected! We took her to a vet to check for a microchip, but she didn’t have one. Making use of social media, we went about finding her a loving home while she lived at work in our conservatory for a few nights. Within a few days, a good home came up 40 miles away, so we took her over and she’s now living happily with her new family.

Our second night in the lay-by was interesting too… Our cat had returned but unfortunately it seems her kitten didn’t survive. It didn’t take this little miss long to come in and warm up by the fire… 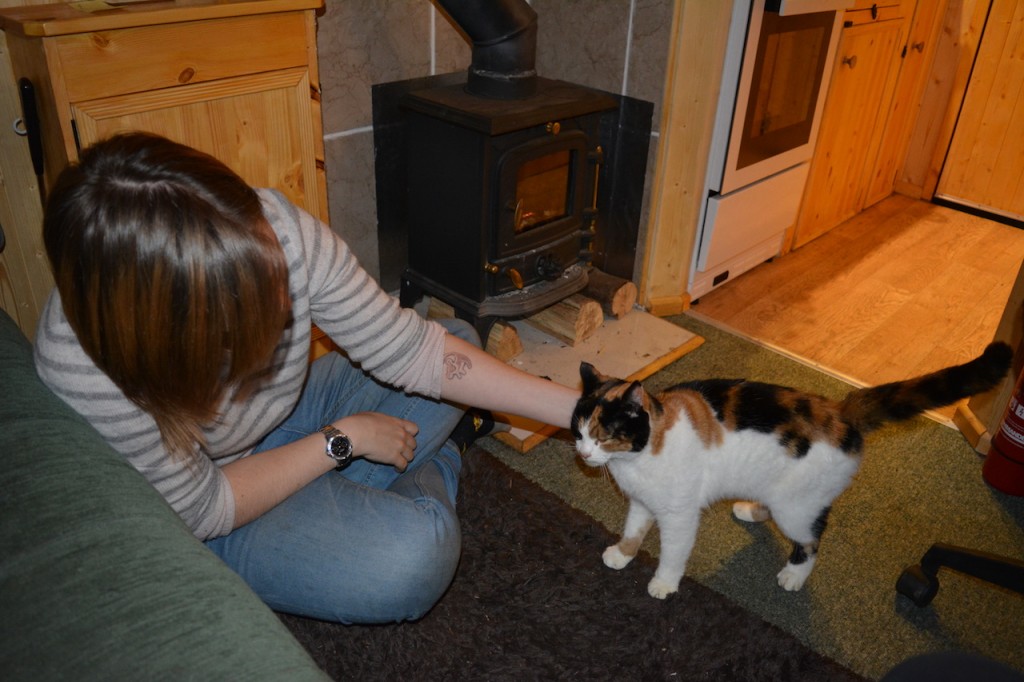 This cat was so friendly, we gave her a little food and some water, then after a quick warm by the fire, she headed off back into the woods.

In the morning, we received an email from Nikki and Mark who had previously been looking for the dog. They’d also spotted the abandoned cat and had given her some food. Very kindly, they were able to offer her the possibility of a home and their son brought some cat food up to us that evening. He also brought us a delicious home made loaf of bread which his Mum had sent up for us. The missing dog hasn’t yet been found. 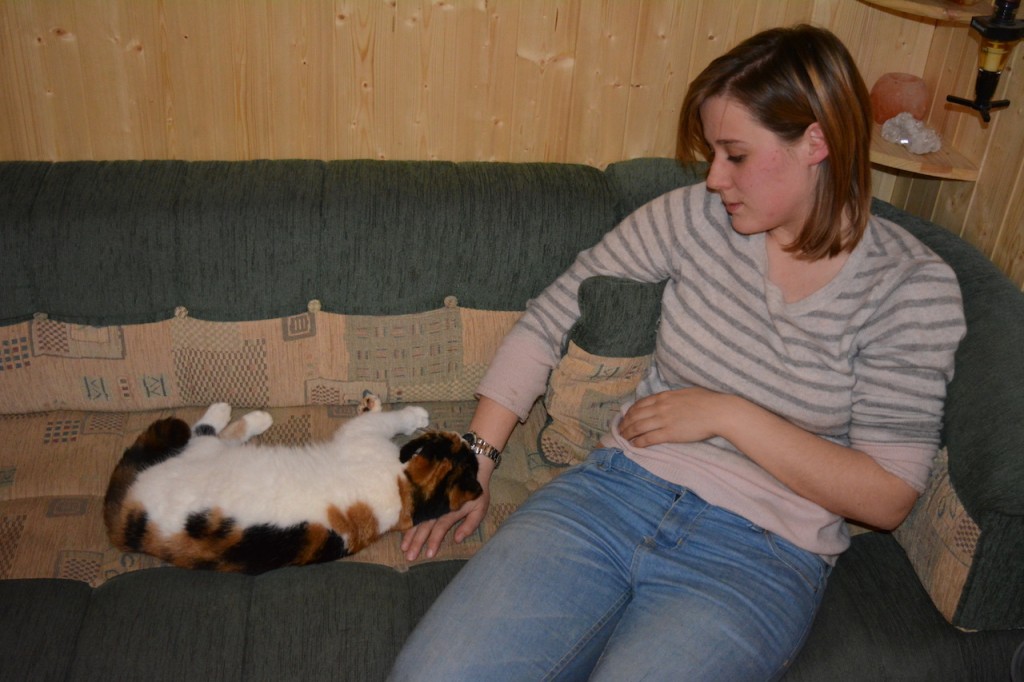 The cat, fully equipped with a full belly, started to settle each evening with us. She soon started living the life of Riley, so that’s what we called her! 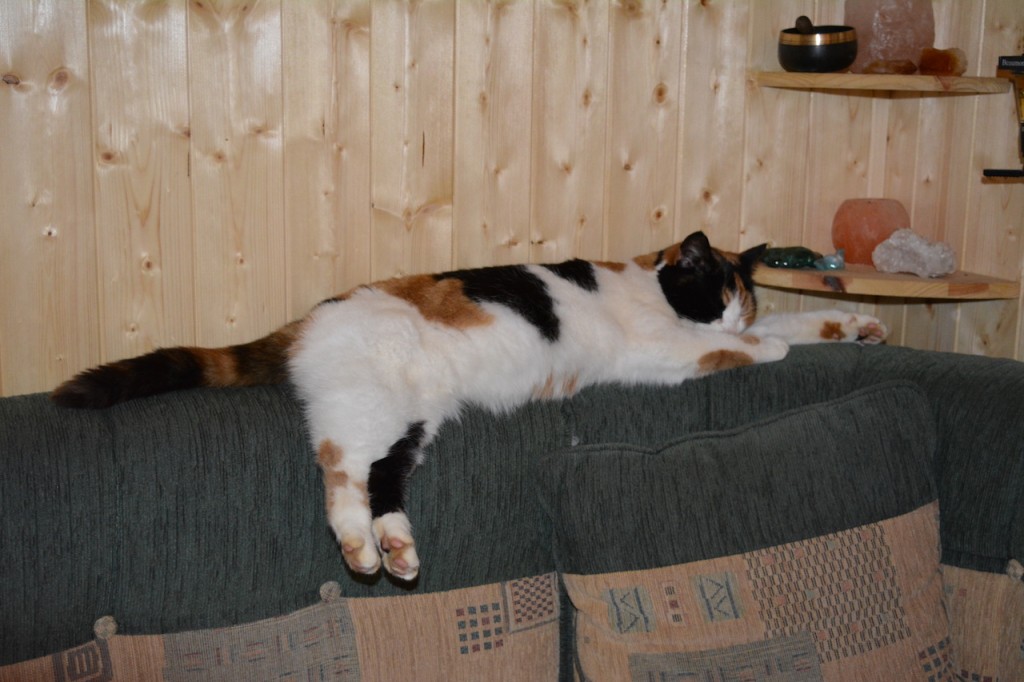 By the third evening, she was very much at home with us. She did have to go back outside at night though!

We’re told the next day she was rescued by someone and had been re-homed, so we never saw her again. Still, a happy ending as she’s safe and sound. 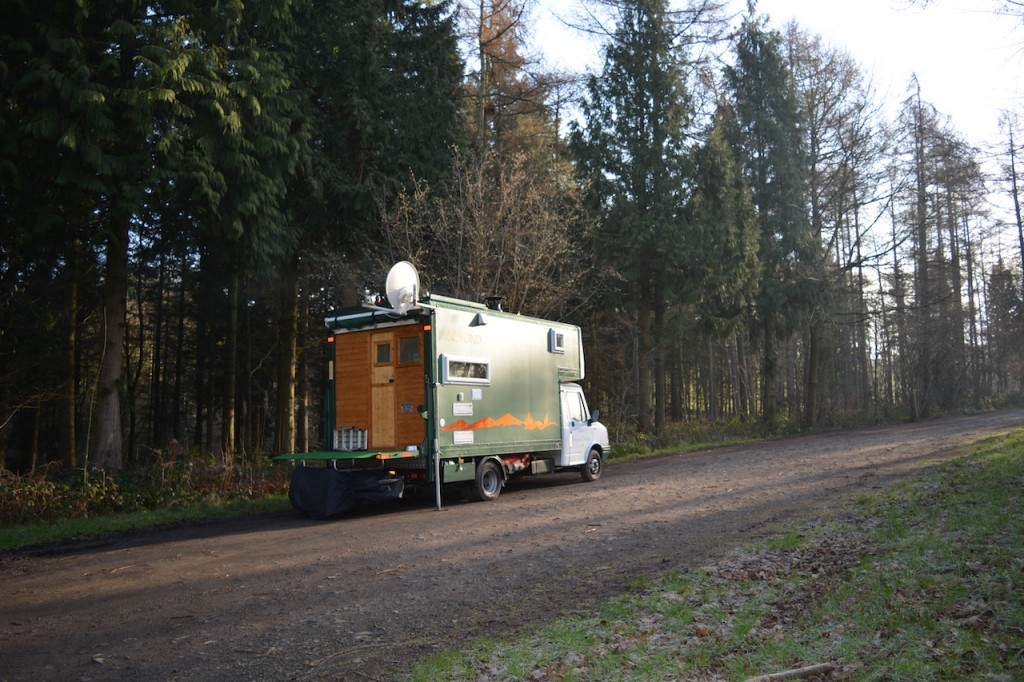 As a rule, we don’t stay in the same place for more than two nights in a row. This location has been a bit of an exception though as we’ve been looking after various animals, and made friends with local residents!

We had company one evening, as when we arrived there was already a motorhome parked just in front of where we park up. It was a stunning motorhome and we parked up behind it, doing our best not to disturb them too much. 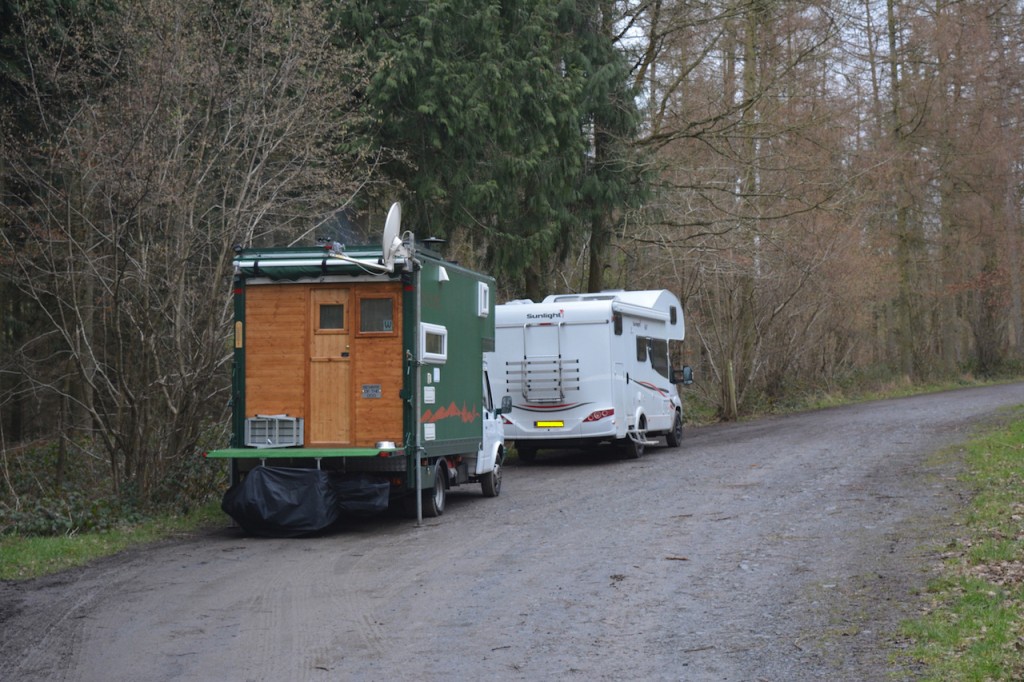 In the morning, I said hello to our neighbour who was off to walk her dog and apologised for disturbing them. As it turned out, it was their first time wild camping and we did scare them slightly by parking up. We felt bad for that as we know what it’s like when another vehicle appears in the dark! The lady said she’d been on our website though and has since made contact with us. So if you’re reading this, we’re sorry for disturbing you and please do give us a knock if you see us again!

Just before we packed up to head off on a Sunday morning, a group of really friendly mountain bikers came over complimenting us on the van conversion. They’d been on our website and had read all about us! Following that, a lady on horseback came past and said hello and that she’s seen our van all over the place!

We’re meeting some really lovely new people! This is the life!!

Finishing off the van!

Now all our animal welfare work is done for the time being, I have been able to get some jobs done on the van.

I decided to stop using mains (from generator or inverter) in the van and make a device that can power the laptop, monitor, etc. directly from the battery. Far more efficient! I had the idea in my head of how to do this already, so I got to work… 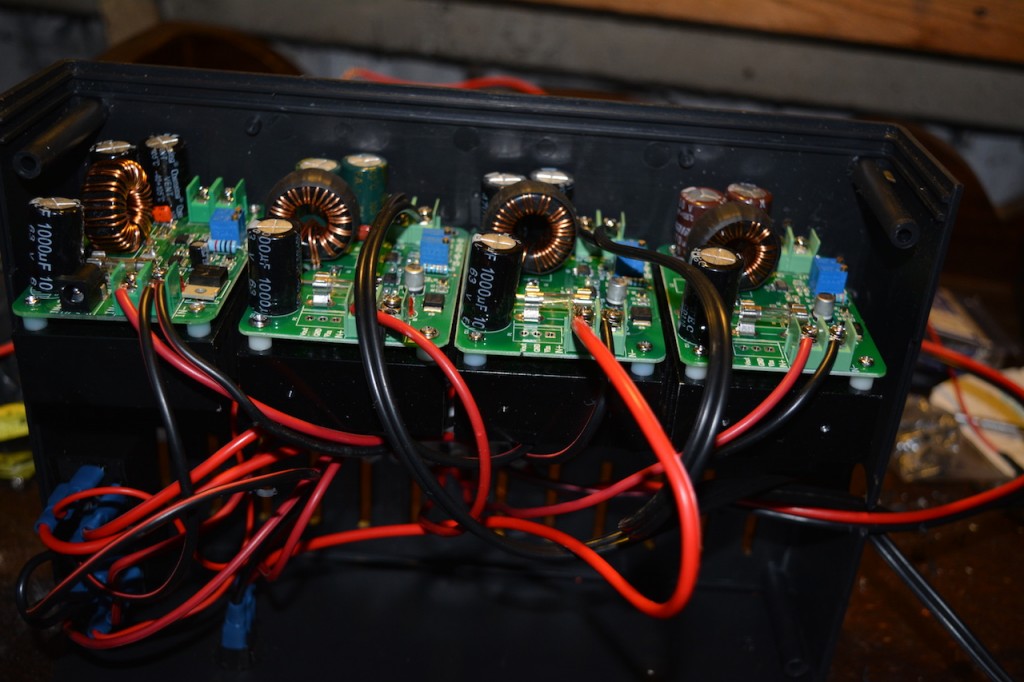 This little box of tricks converts the 12V from the battery bank to the DC voltages required by the devices in the van. It has a selection of DC outputs ranging from 12V to 48V for the various devices it needs to power. The idea being that no AC power is used and this setup will be more efficient than using an inverter to go from 12V to 240V then back to whatever voltage it needs to be. The generator is now just used for charging the battery bank if it’s needed. Of course, in the summer, the solar will easily run and charge everything.

I ordered the lock kit and as soon as it arrived, the fitting commenced… 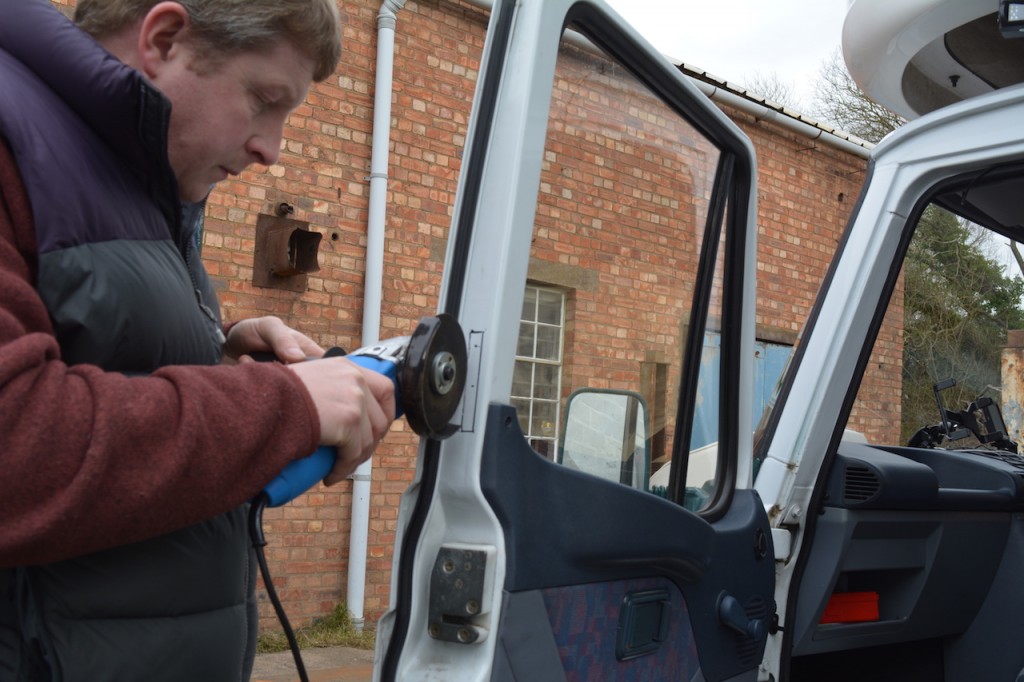 The measurements were made, markings drawn, and the fitting was under way. A few hours later, both doors had deadlocks fitted. 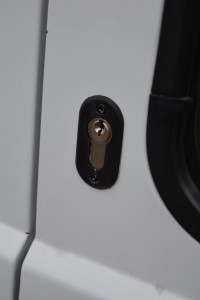 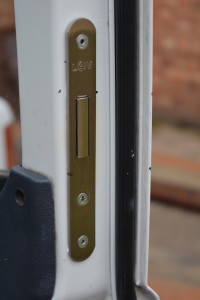 So, at the time of writing it’s only a week away from our first ever trip abroad in Beyond and we have just done something rather exciting….

Massive THANK YOU to my Mother, Judy, who’s bought us our ferry tickets (even though she doesn’t want us to go!! Promise, we will come back alive!) We’ll be leaving the UK from Poole and starting our drive through France on Wednesday 2nd March! Our planned route is the most direct from Cherbourg to The Algarve, Portugal.

For the last week of February, I have been doing little bits on the van which weren’t essential but are nice to have done, such as fit a stereo with flush ceiling speakers in the living area. I’ve upgraded the battery bank to four large leisure batteries, now giving us 480AH of power; that’s double what we had for our tour of Wales. 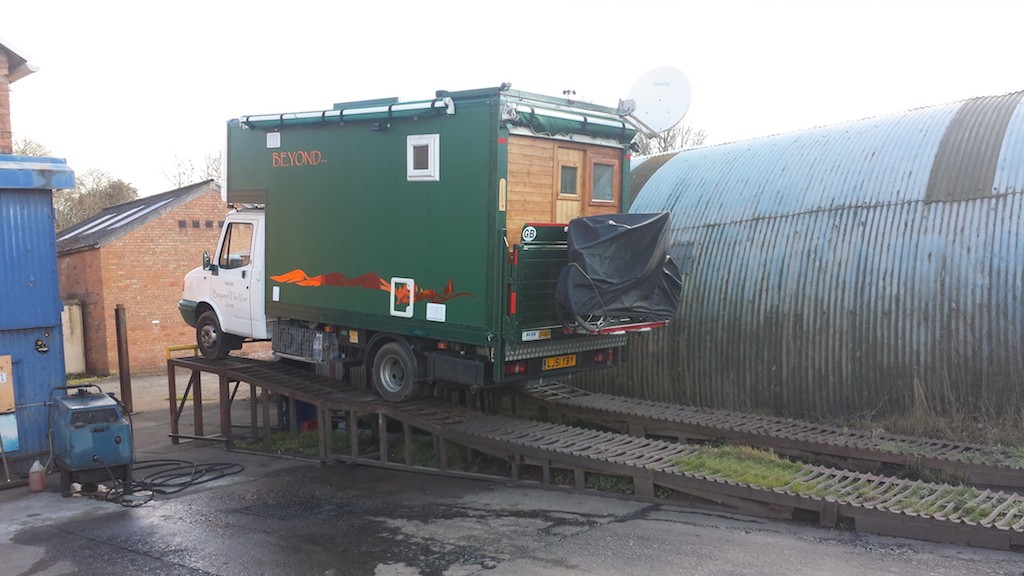 Now all serviced, we’re ready to go Beyond… 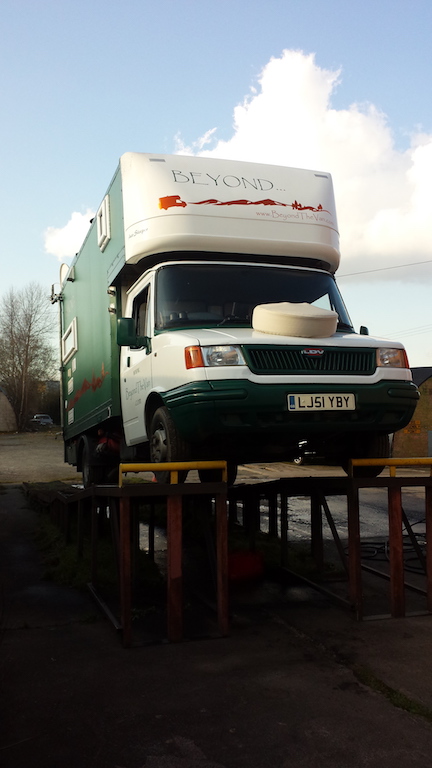 Not beyond those yellow stoppers though. My heart was in my mouth watching our beloved van drive up those huge ramps!

At the time of writing, it’s February 29th 2016 and we’re completely ready for our first month of travelling, starting tomorrow. With tears from both Mothers, you’d think we were going for a year! We promise to come back, but we can’t promise not to go again very soon!

To finish off an interesting month, a Chinese takeaway was in order. We opened our fortune cookies and this is what they both said the same thing…! 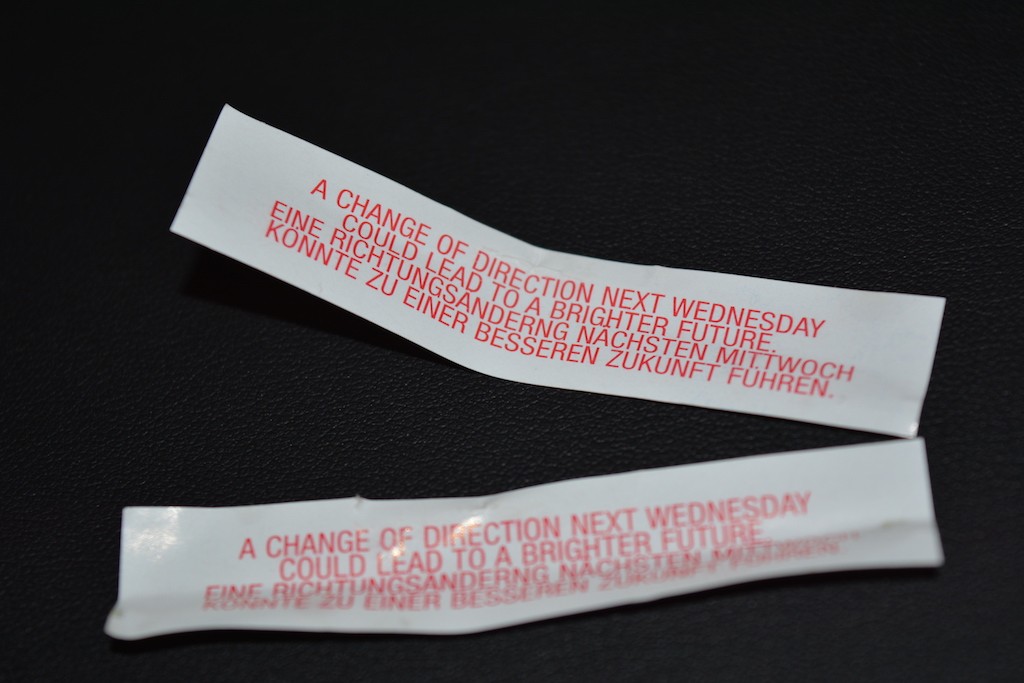 Make of it what you will…!

I aim to do regular Blog posts throughout March, sharing our adventure through France, Spain and Portugal.