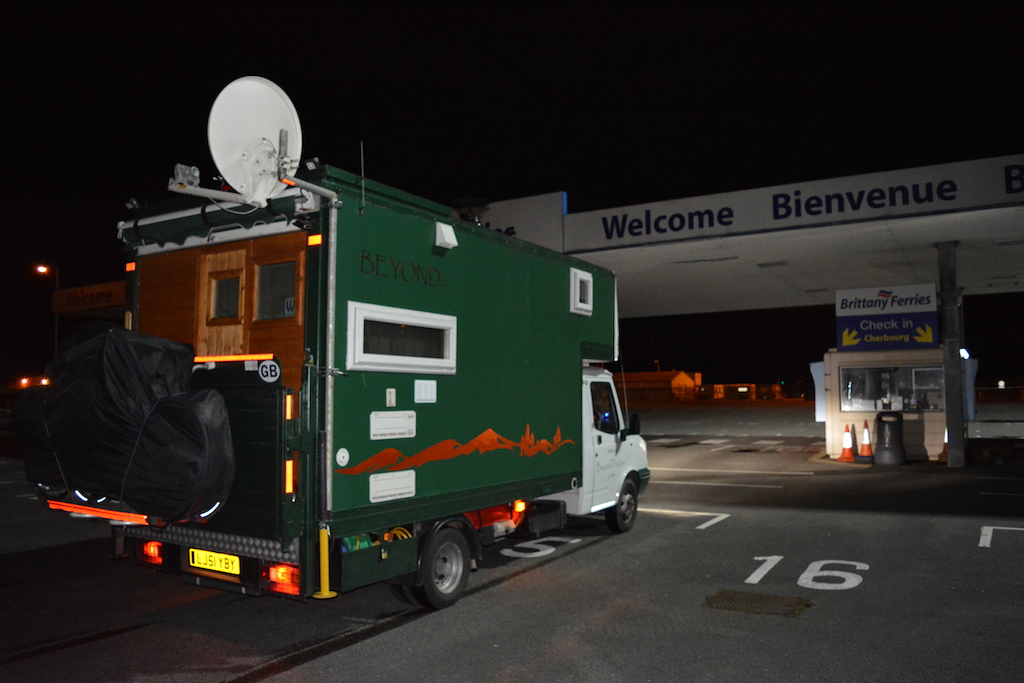 Mid afternoon on March 1st 2016, exactly when we had planned to head down to Poole to start our adventure to Europe – and we’re actually ready! 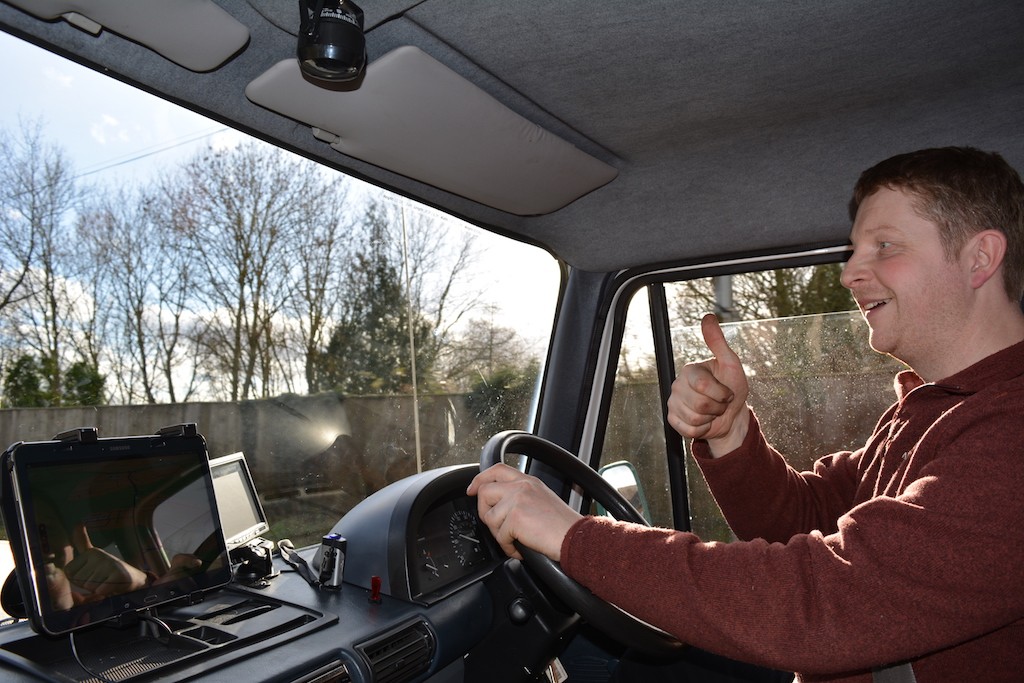 Rather than use the TomTom Go 60 sat nav, we decided to test out my Samsung Galaxy Tab 4 10.1″ tablet, running the TomTom software. The bigger screen should make things a lot easier. I chose this tablet because I’m not keen on iPads! 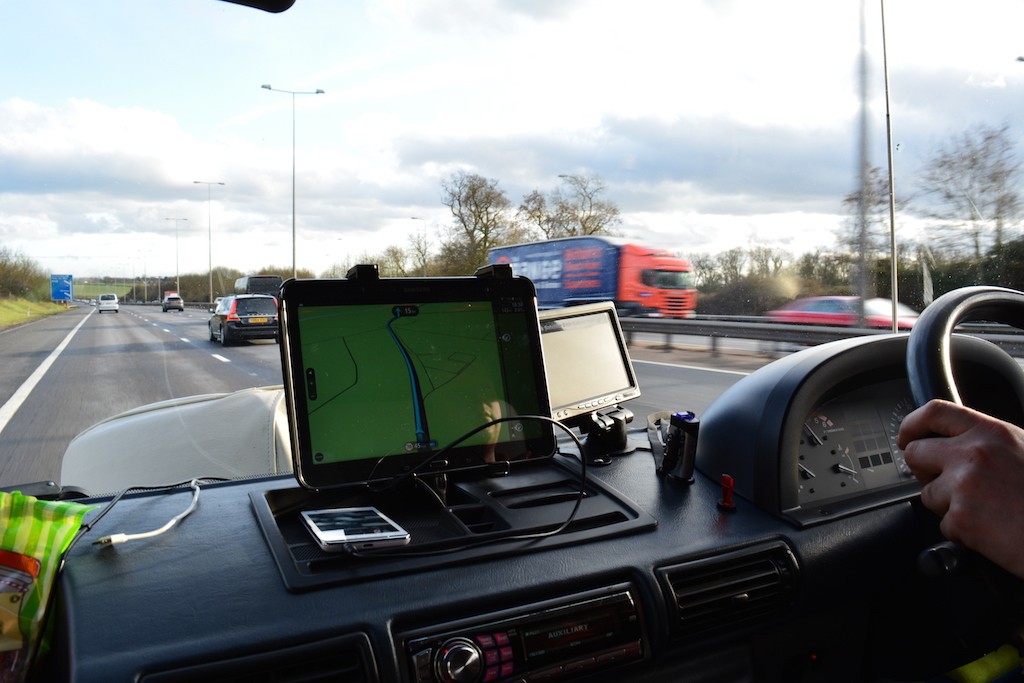 We were right, it’s great. Best Sat Nav we’ve used so far (except for Waze, but this requires 3G which would cost a fortune abroad!).

Also on the dash you can see plugged in our GPS tracker which records our travels and allows me to put them on the blog. The little Samsung Android MP3 player was hooked up to the stereo, so with some tunes, off we went!

Tracking our route is all new to me! I bought the plug-in GPS tracker which plugs into the dash of the van and with some great advice from Kirsty’s Dad, Terry, I have managed to upload it to the blog with the facility to zoom into live Google maps. If you click on the map above, you’ll get a really accurate version! Cheers Terry!

Now, Beyond is no speed machine, and those who know LDV Convoy vans will appreciate how true this is. We plod along at 45-50MPH with the very occasional burst of 60 up hills when we have a good run at them. You can’t be in a hurry in this van, but we don’t want to be. 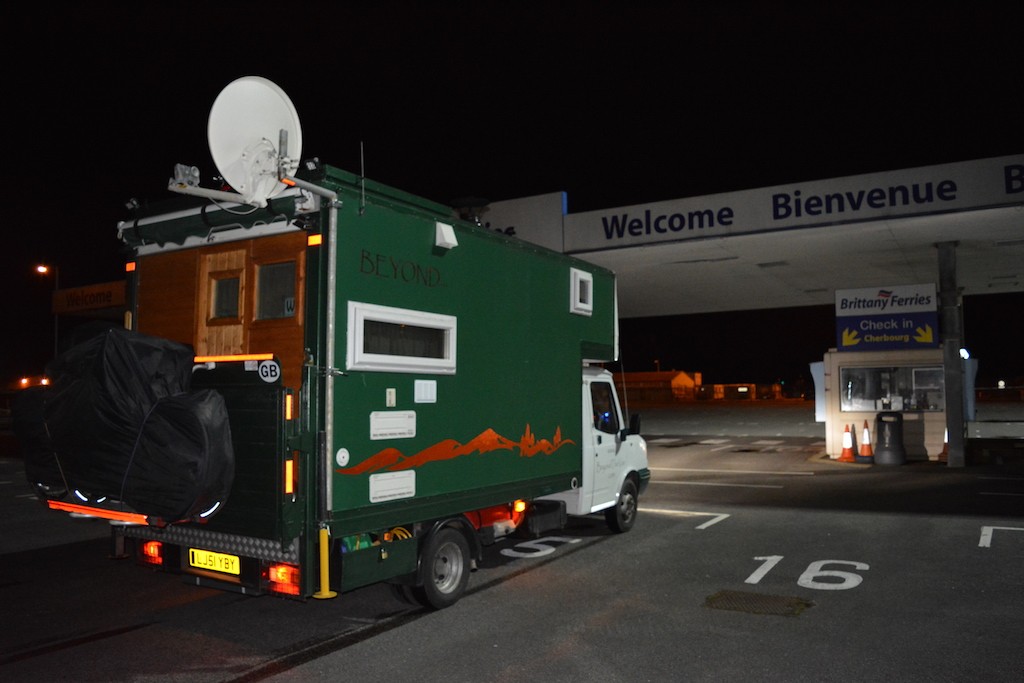 The trip down was good and after a bite to eat en route, we arrived exactly where we needed to be at Poole port – 11 hours early. Not a single person in sight at 9.30pm, we headed out of town and found a quiet residential road to park up in for the night. I made great use of the kerb to level the van, and even managed to get the satellite internet working through the trees. We made our calls to home and retired for the night. With no disturbances in the night, we slept well and were ready to get back to Poole port for 7am. 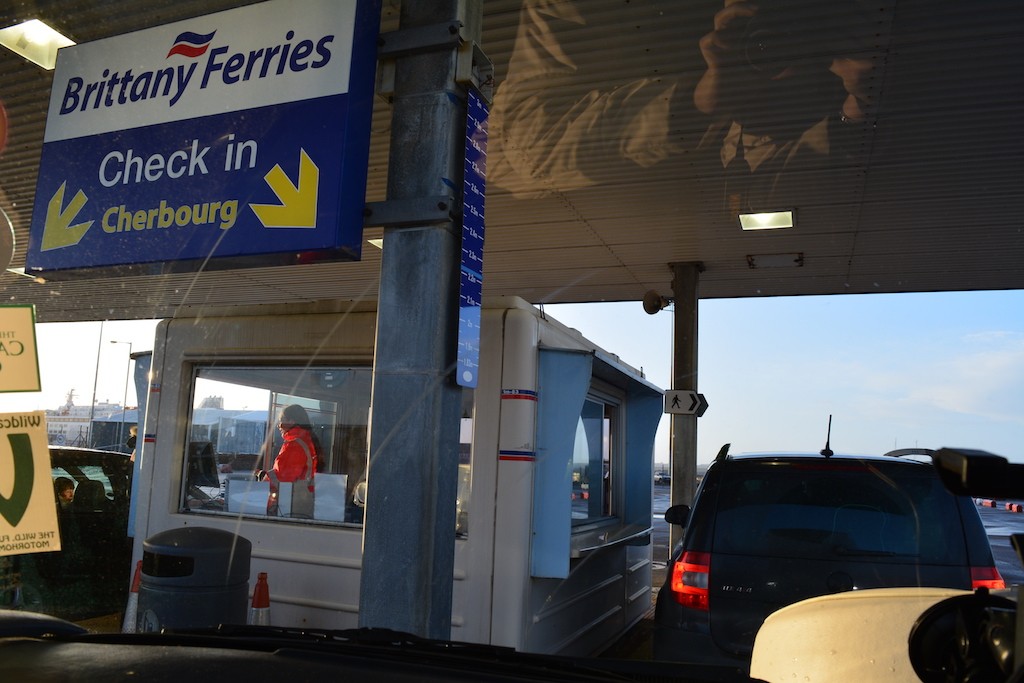 Obviously we were later than we had planned, but only by half an hour. Still there before we were actually supposed to be.

Checking in was straight forward and Brittany Ferries were excellent. The staff were really friendly and most helpful, even to the point of showing us how to fit the headlight beam deflectors properly. 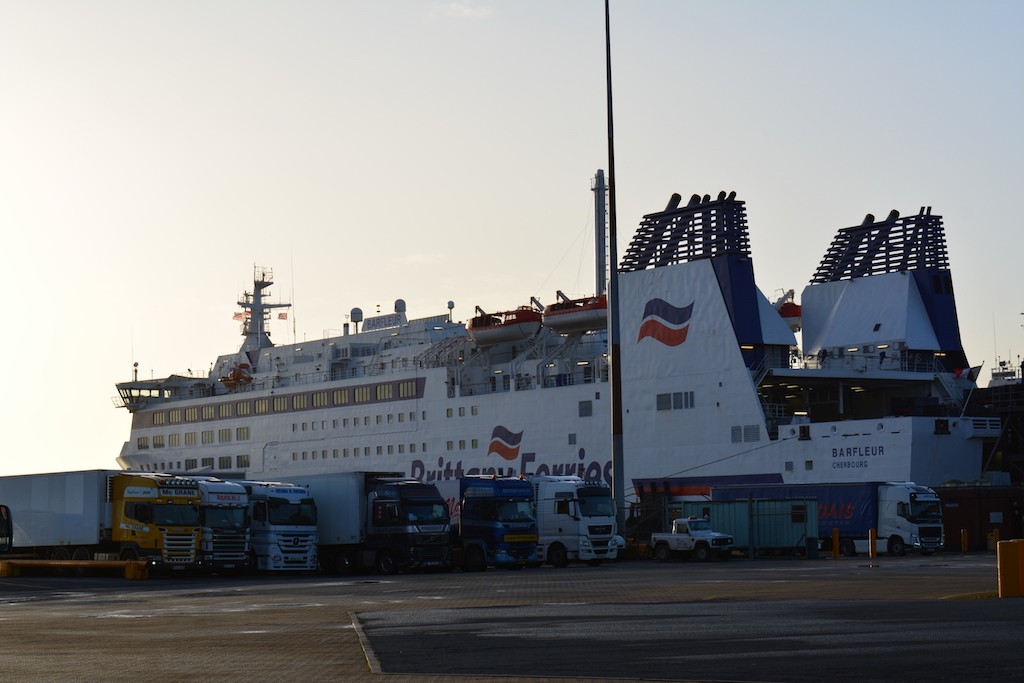 Barfleur Ferry, this is what we were here to board. Boarding was a pleasant experience and we didn’t have to wait for long at all. 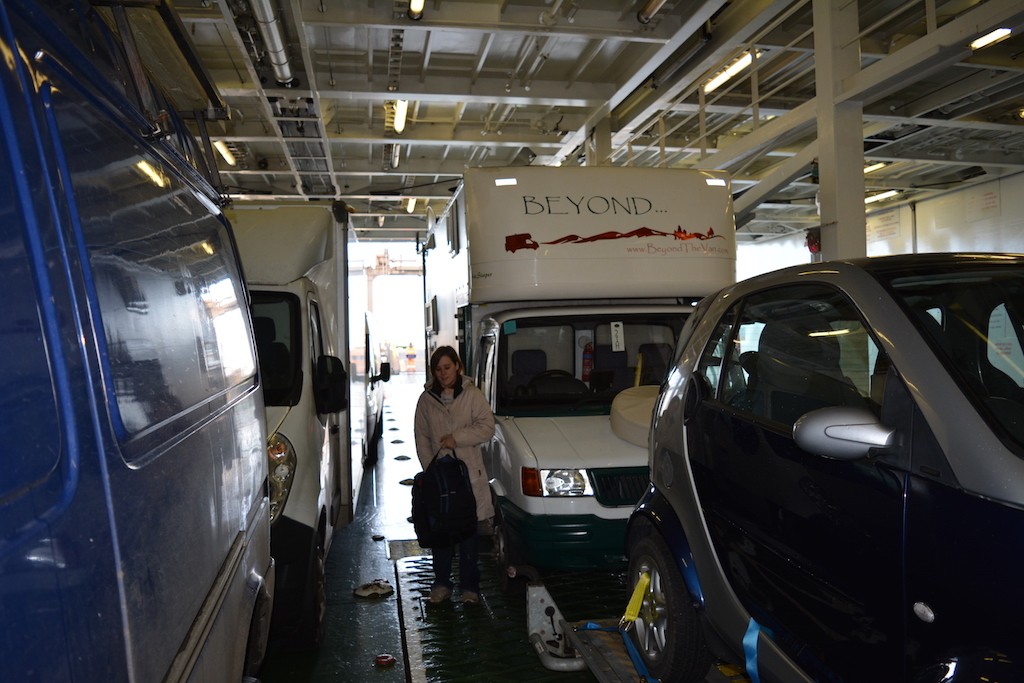 Beyond all sorted, now for us to head up into the ferry and check out the scenery! 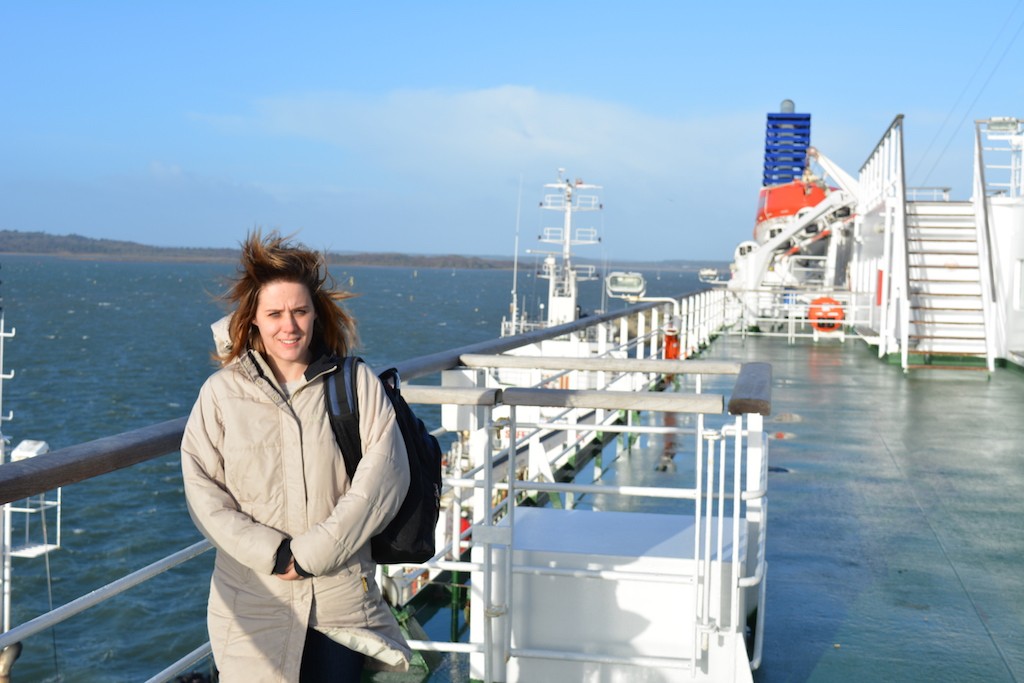 A quick venture on to the decks first of course! 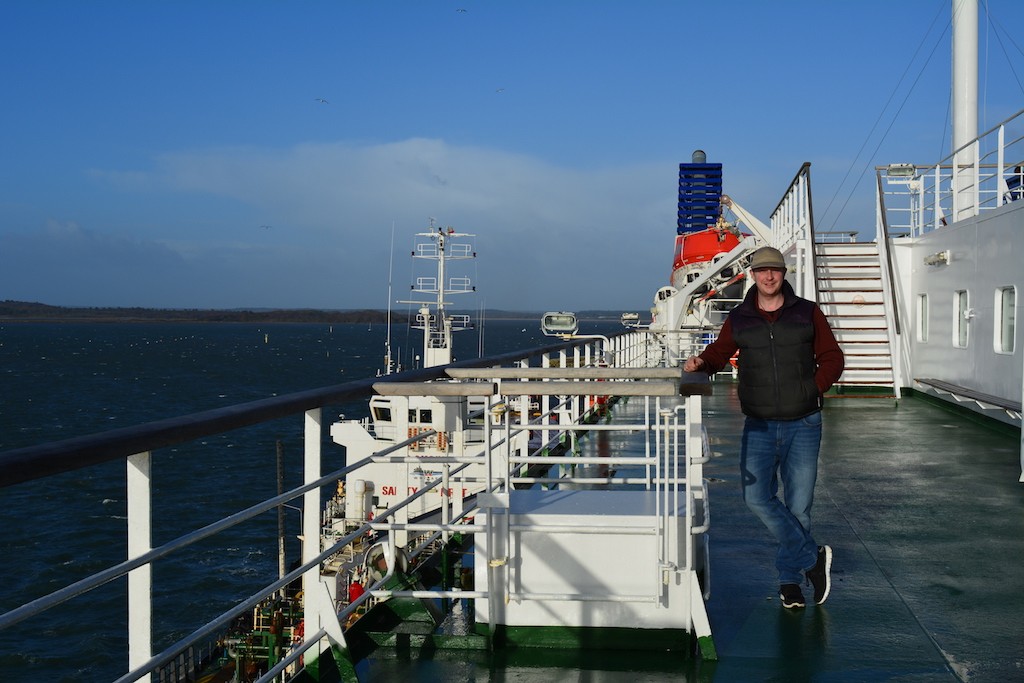 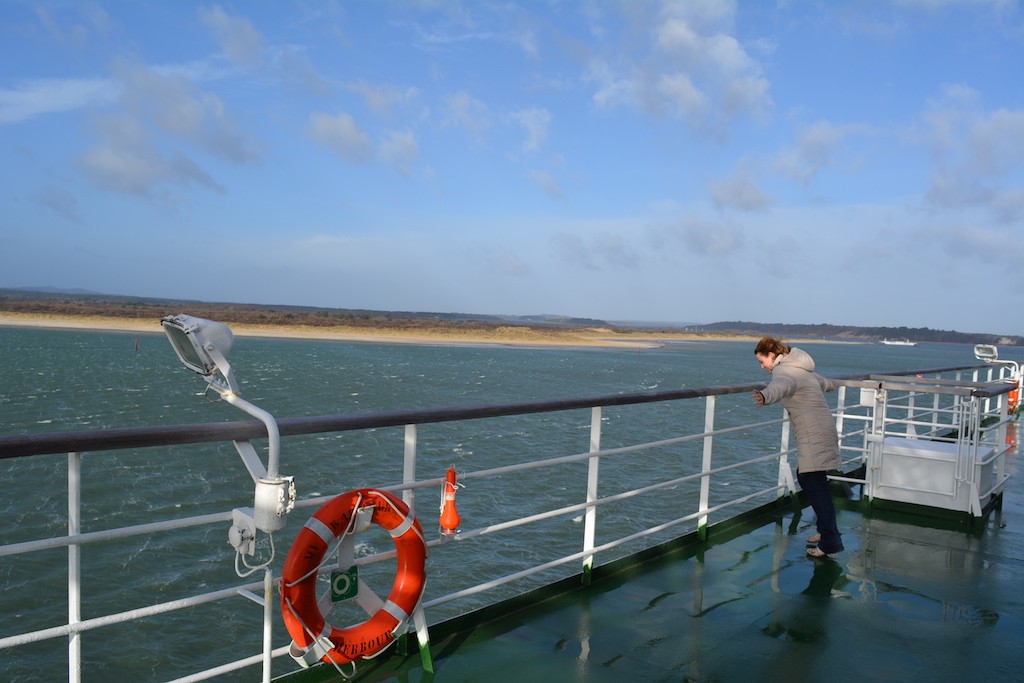 Spotted the not-so-local lunatic on deck being held up by the wind. 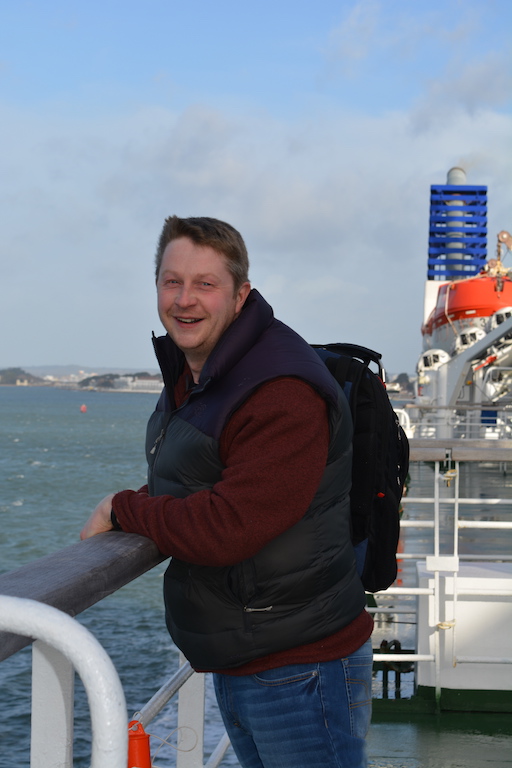 The wind was quite fun actually, though rather bitey! 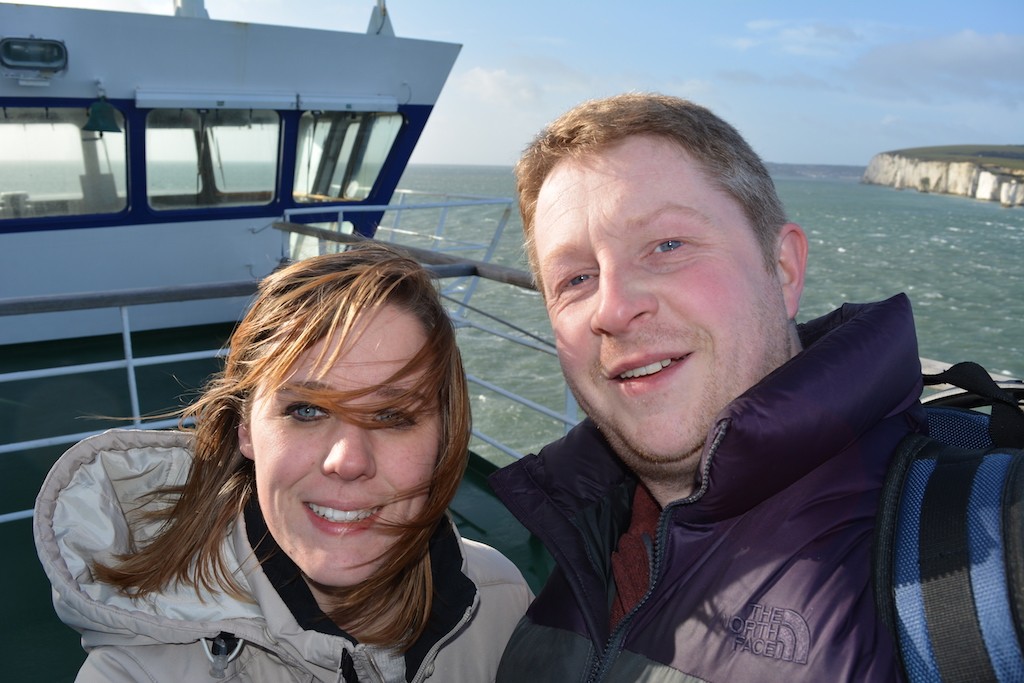 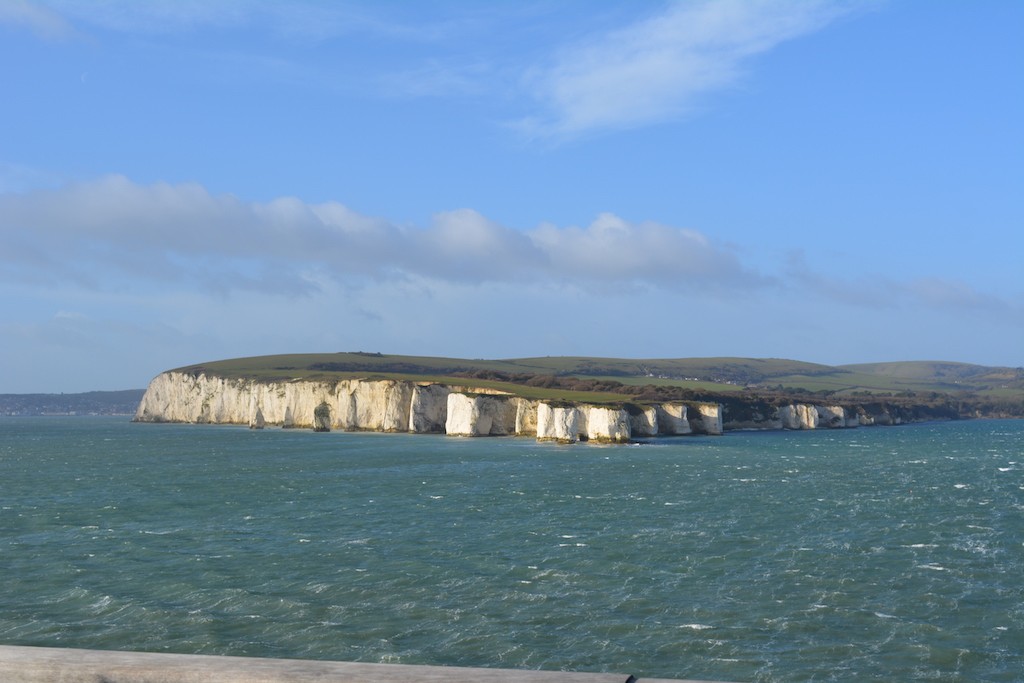 Although Kirsty was convinced she was looking at the White Cliffs of Dover (from Poole?!), I was admiring the Isle of Wight. 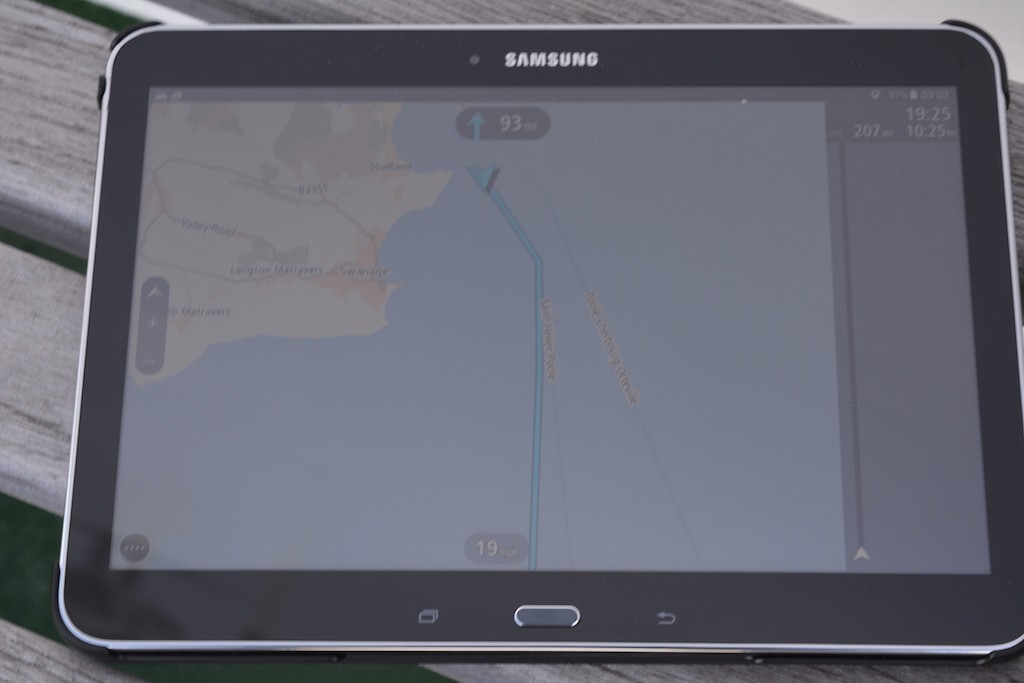 The ferry seemed to average 20MPH.

As bad luck would have it, the sea was pretty rough and the Ferry was up and down like a cork. I didn’t think I got sea sick, but I was wrong. Three times wrong. But I wasn’t alone, Kirsty also had to make use of the provided sea sickness bags! We felt really awful. We tried Level 7 as people were saying the swaying wasn’t as bad there but we then found even the items for sale in the shop were smashing off the shelves. I dragged myself to reception and asked for a day cabin where the very helpful French lady sorted this for us, and we headed to our cabin.

The walk to the cabin was surreal. Walking down the steps, gravity didn’t seem to be normal at all! 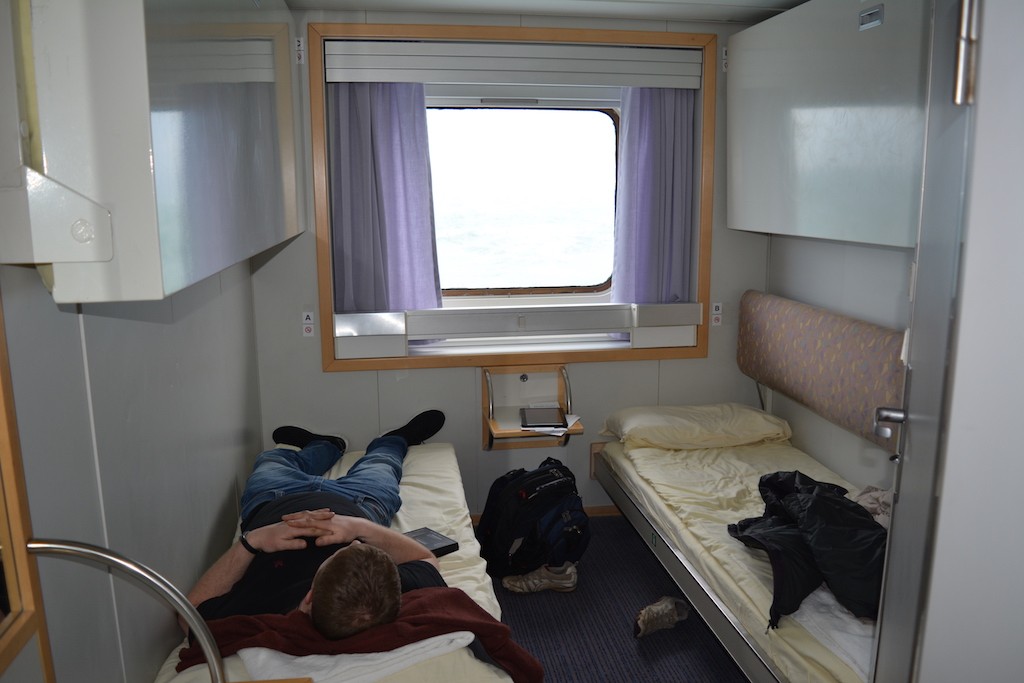 Making further use of the sea sickness bags, all I could do was lie there and pray France wasn’t too far away. 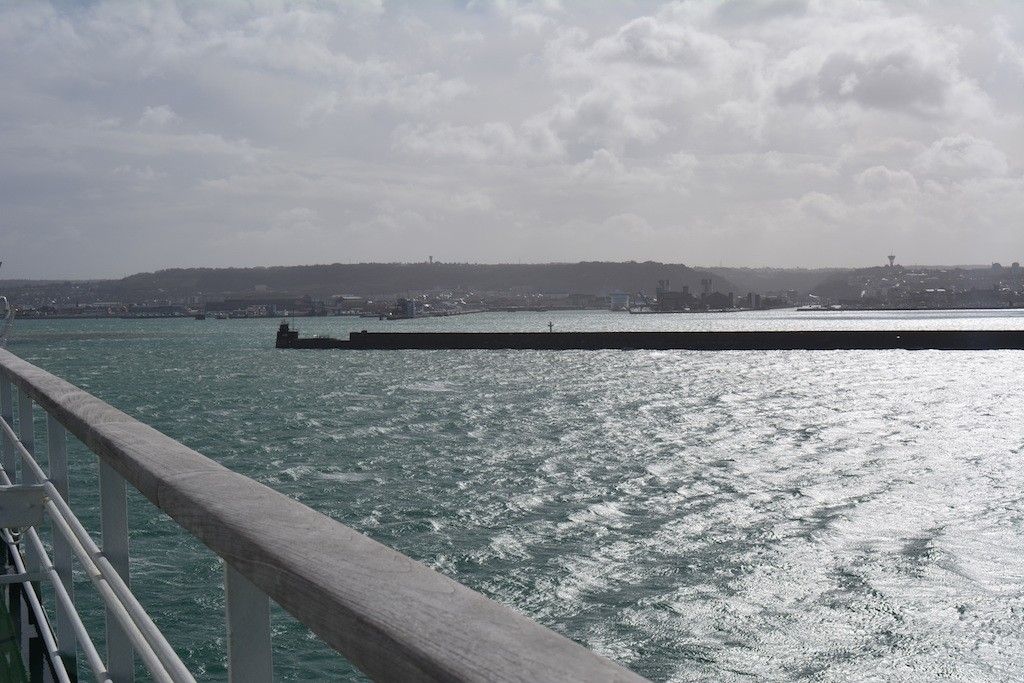 Thankfully, the sea calmed down half an hour before we arrived at Cherbourg. We felt more human again and ventured out to say Bonjour to France. 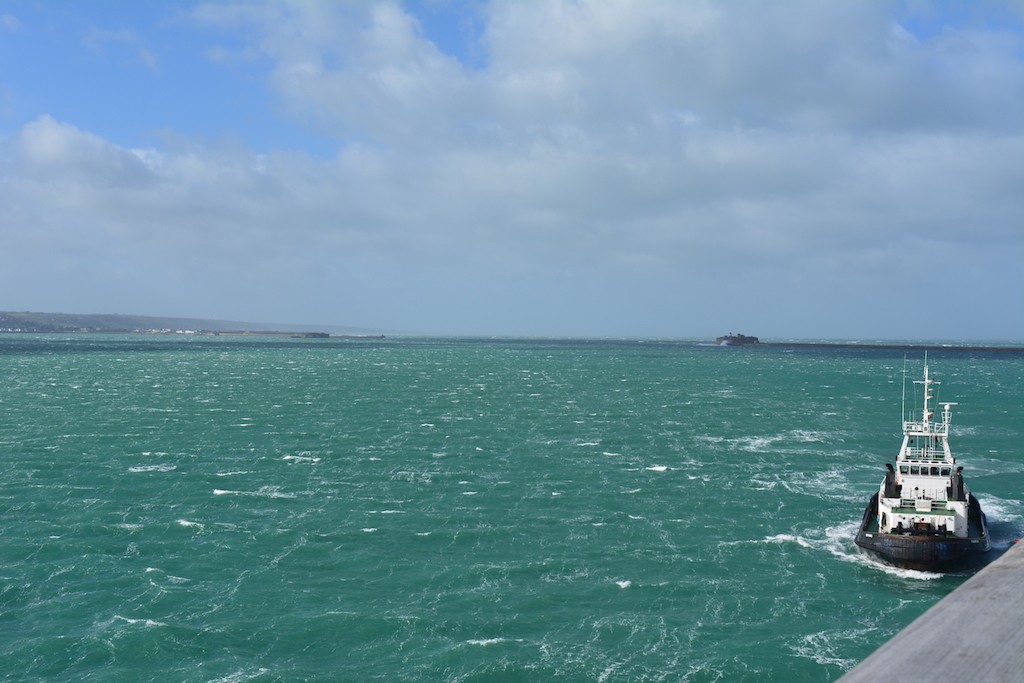 Lovely sea, sunshine, and a bitter wind. We were almost there. We’d actually left the UK!!! 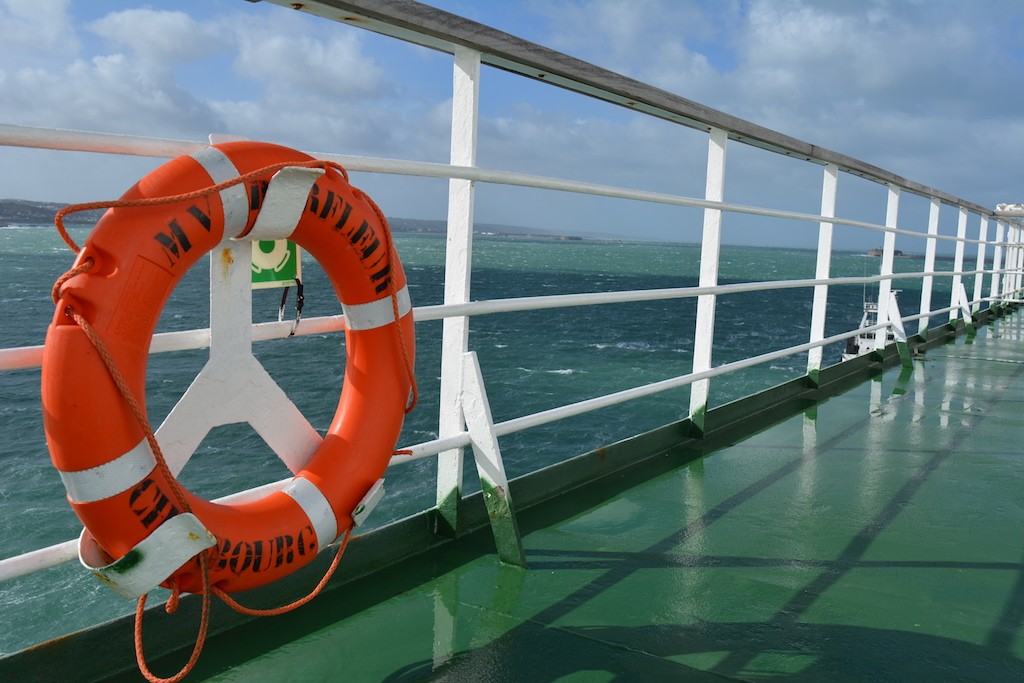 I don’t think I’ll take up sailing as a career. 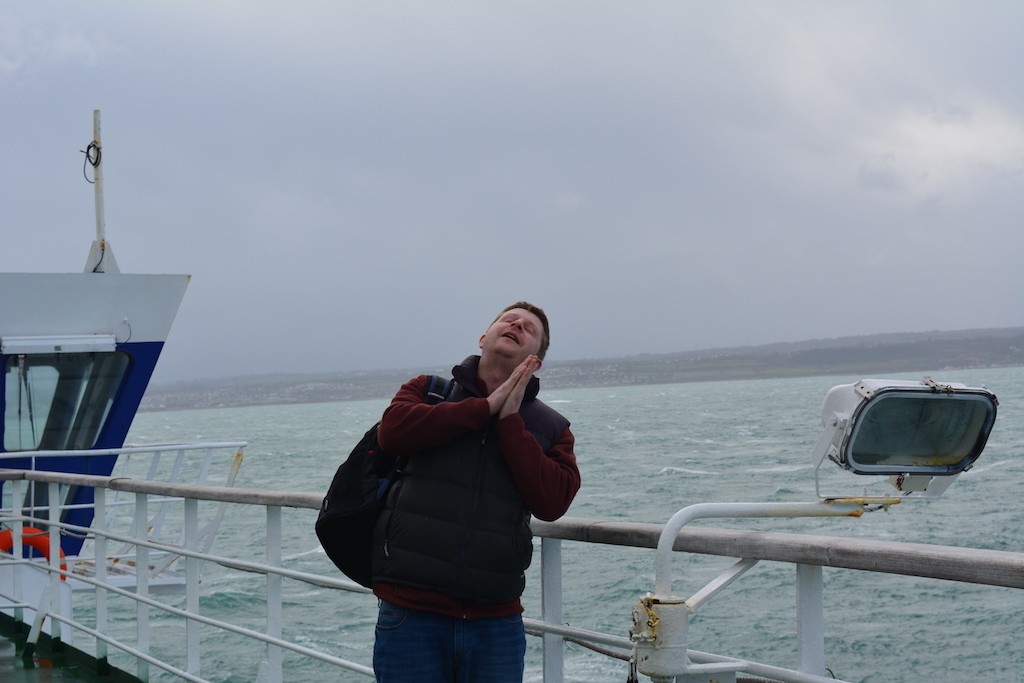 I was absolutely delighted to enter the port. I really don’t know if I’d ever felt that sick before.

We waited for the announcement asking us to return to our vehicles, and headed back to Beyond. After around fifteen minutes, we drove straight off the ferry, through border control, and on to the road.

They all drive on the wrong side of the road here.

I’ve driven a left hand drive car on the right hand side of the road before, and that was pretty easy and natural. Driving a right hand drive on the right wasn’t as natural but I was ok with it! Coming off the ferry, I followed other vehicles but soon we were on our own. Well, what’s the worst that can happen?! 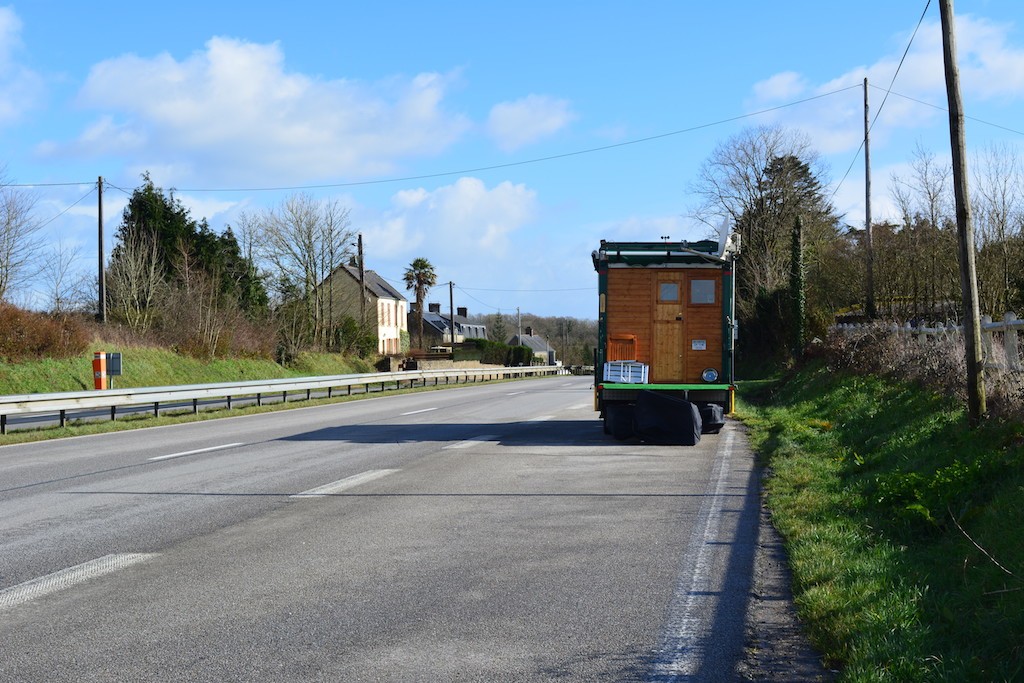 Twenty miles into France, we found a lay-by and pulled up for some long awaited lunch. 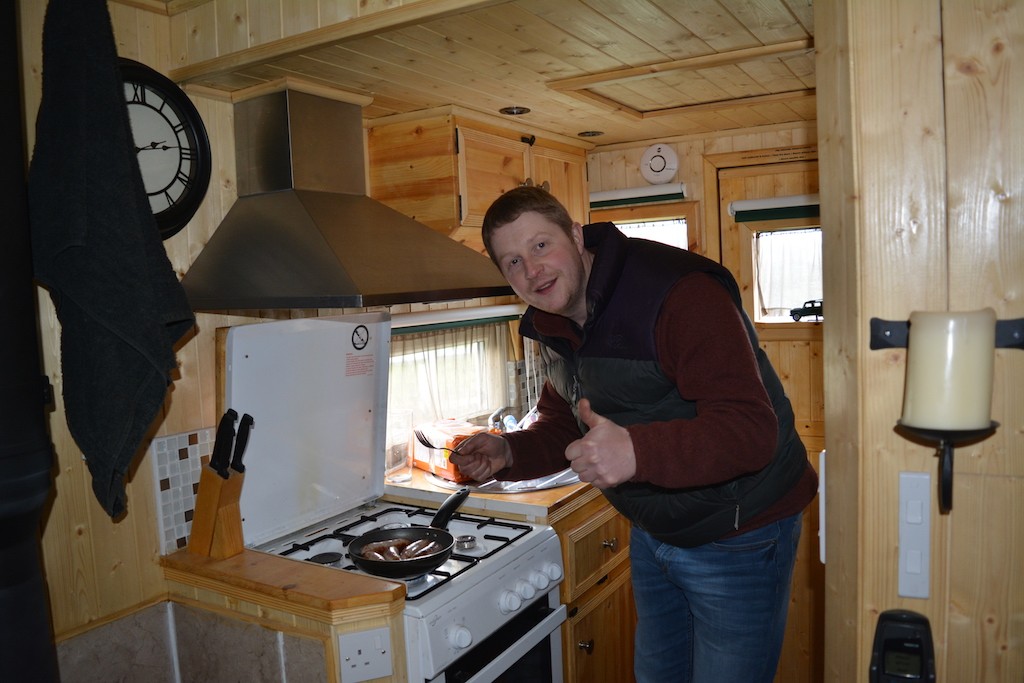 Feeling alive again once more, we packed up and headed further into France. Along the way, we pulled into a services to stretch the legs. Coming back to the van, a UK Transit van had parked up behind us. Naturally I went over and chatted (as I do!) to find he lives in Worcester, just down the road from our home soil! Small word!

We continued into France a little further, heading towards Rennes and pulled into an Aires (type of services) to park up for the night before darkness descended.

Within a few minutes, the satellite was aligned and our broadband and landline phone were up an running! I had been concerned that aligning the satellite abroad might not work or be difficult, but it was no different from setting it up in the UK. Logically, it would be fine, I just had to find something to worry about!

Along the way, we picked up some valuable information from a member (oldish hippy) of the Wild Camping forum I’m a member of. In Spain, a rear mounted cycle carrier must have a 500×500 reflective board on it by law. On the spot fines if you don’t have one fitted! Thanks for that advice, really appreciate it – we’ll be buying one en route!

Sorry, I just had to say it again!

After six to eight months of building this van, we’ve gone Beyond! Beyond the UK, that is! We’re actually in France!

We plan to continue travelling down through France tomorrow, towards Spain, with our destination being Portugal. The Algarve to be precise. A lady who follows our blog is currently down there also living in her van, so we hope to meet up with her at some point, as well as a chap who’s helped us no end from Brittany who we hope to drop in on when we head back up.

It really is. Sea sickness aside, we’re loving it! Regular blog updates to follow, but until then…