↓ Skip to Main Content
Home › Testing the van lifestyle! › Beyond to Wales – Part 1

Beyond to Wales – Part 1

Warning: This is my first ever attempt at writing a Blog. Viewers may find it slightly, or very boring. I may improve as time goes on….

After 6 months of building the van we finally embarked on our first trip away. Leaving behind Kidderminster on Boxing Day 2015, we’re heading for… Wales.

After a couple of hours on the road, we arrive at our first stop – Lake Vyrnwy and find our spot for the night. A small parking area just along side the lake. Torrential rain and a road resembling a river. Just the job. 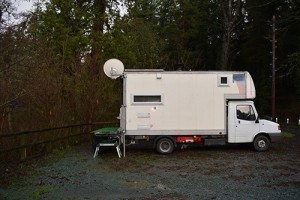 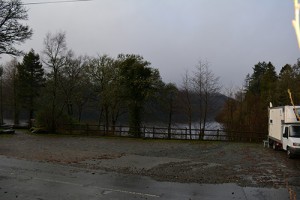 First things first, setup the satellite so we have internet and a phone. We have a slight problem: we’re surrounded by trees – tall ones. Not to mention the van isn’t on a flat piece of land. No satellite for us tonight. No phone calls or internet… fail.

The night was very pleasant and peaceful, we drifted off to sleep to the sound of the rain on the skylight. By morning, the rain had let up and we awoke to a nice, calm morning. 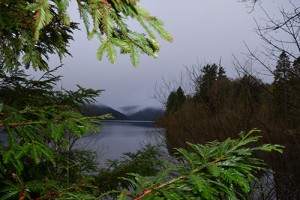 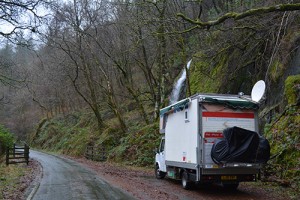 After a leisurely 12 mile drive around the lake, we headed off towards Llandudno.

Today was going to be mostly driving, but that was the idea for this tour – give the van a good test. A test it certainly got as the sat nav directed us for a fair few miles over Snowdonia, up and down some serious hills! Pushing just short of 4.5 tonnes, the Luton showed it has some decent power. Thankfully!

Nearing Llandudno, we spotted a petrol station with LPG and not knowing how readily available gas would be in Wales, we decided to top up the gas tank. At 54p per litre, it can’t be bad! After fuelling up one of the diesel tanks, we headed off down to coast and over the Menai Bridge over to Anglesey.

It was getting towards early evening and of course we’d not contemplated food shopping on this fine Sunday evening. We soon spotted an Indian restaurant and even better, it had tables outside. The waiter was a little confused as to why we wanted to sit outside in the cold, but once we explained that I can’t sit indoors surrounded by mobile phones and wifi… he was still just as confused. Nice food though! A quick call to home from a phone box, and we were back on the road.

We soon headed off in search of our night spot, which we found relatively easily and once we had decided there were no obvious signs saying we couldn’t stay, we parked up and got settled.By now I’d almost started to get the hang of which direction the satellite would be from the good old school compass I’d bought earlier that day. 160/ish degrees South East is where it’s at, so I got to setting it up. Tonight though, it only took me ten minutes of finding no signal before I realised the van has to be parked completely level for me to have any chance of this thing working. Was the van level? No. Looks like I’m reading a magazine tonight then. Again.

Another peaceful and undisturbed night apart from the angle of the van meant sleeping wasn’t quite right! We are learning though – and that’s what this trip is about. I was woken by cars and horse boxes arriving in our car park for their morning activities. Nobody bothered us though, or acknowledged us come to think of it! Leaving sleeping beauty in bed, I went for a wonder outside and found us a nice cycle path to have a go at, which we did a little later on. It wasn’t exactly a marathon ride, in fact we didn’t find anything to look at or visit in the nearby village. The strong head wind on our way back proved hard work though… 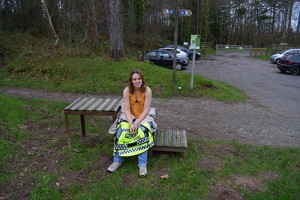 We bid farewell to Anglesey, and headed off towards Porthmadog and then Aberdovey for dinner in a car park (as you do!), just catching the local shop before it closed. We weren’t overly confident about staying the night in the car park so headed back on the road after we ate and on to Aberyswyth. Our first stop was Morrisons in hope of filling up the water tank. Strangely, we couldn’t find a tap there, so headed off to another petrol station in hope. Good old sat nav took us along some tiny roads with immense hills where we found this… closed… petrol station – with no tap! By this time, fuel was also needed so we headed back to Morrisons to fill up. I asked the cashier if they had a tap and he pointed to one on the side of the kiosk… lesson learnt here: always ask!

Heading out of town towards Aberaeron and Cardigan, we found a nice layby for the night. Not the quietest of places on this fairly busy stretch of road, but it served us well for the night. 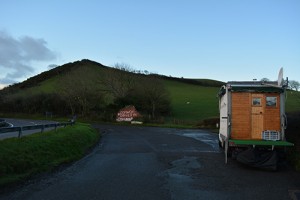 Tuesday morning and I went for a browse to see if there was anything interesting near our layby. The answer being no, it was the entrance to someone’s farm. Without too much hurry, we headed into Cardigan and on to New Quay. 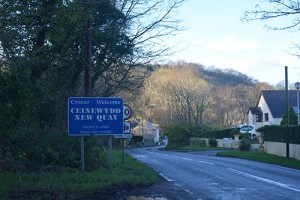 Off towards Fishguard next. Clocking up a few hundred miles, all at a leisurely pace, today was again, mostly driving with the few odd stops. Moving on to Haverfordwest and then Tenby, we headed for South Beach; and ended up on North Beach. Yes it’s late December and we’re on the beach but we’re not the only people there paddling in the sea!!

I think this is a local lunatic. Never seen her before in my life. 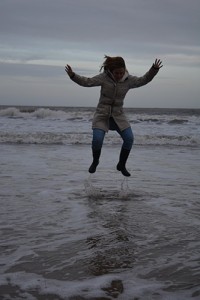 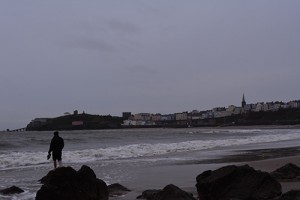 Having heard of a big storm heading our way, by the name of Storm Frank, we had the choice of a spot right by the sea front, or in a layby screened by trees. Thankfully we chose the latter as Frank rocked us to sleep rather violently and continued to do so all night! Had we chosen the sea front spot, we may well have been rocked into the sea that night. A few cars appeared in our layby in the morning, including the council emptying the bins. Nobody bothered us and nobody seemed to run off too quickly when I started chopping logs up on the pavement with my shiny new axe! 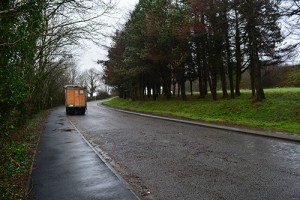 It wasn’t the best night sleep ever and the van wasn’t completely level. We headed off towards Swansea where a stop at B&Q got us some door seal strips in hope of stopping gale force rain wetting the kitchen floor! Swansea was awful for me with mobile phone masts and we quickly moved on, avoiding a very low bridge, to Rhossili and Worms Head for a look at the beach where a Doctor Who episode was filmed. It was a long way to this beach and the rain rendered our visit brief, before we headed back to Swansea to setup the satellite in a Retail Park car park. I’m learning that retail park or supermarket car parks are great for satellite as they tend to be flat and I can usually park pointing the right way! Phone calls to home, a spot of internet and we were on our way.

Knowing of a rural car park en route to Porthcawl which was used for wild camping by other motorhomes, we headed there to find, amongst other things, a sign saying no overnight parking, boy racers and quite honestly, doggers. Moving on swiftly….

We were also aware of a layby near Porthcawl which was used for wild camping (many evenings browsing wild camping forums is the source of my knowledge!) so as that was our next direction, we headed there. This was looking promising, very promising in fact. A remote spot, stream near by, trees for wind shielding – the other side of a bridge with a 2 tonne weight limit. No go then! We turned around and pulled into a layby this side of the bridge which was equally as ideal and perfectly flat. 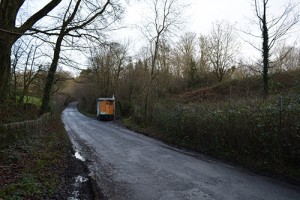 An excellent night sleep here, a very pleasant spot. Cars do go past but they didn’t bother us. Putting the stabilizers down on the van almost eliminates sway from cars and wind. We experienced a torrential down pour at 5am which didn’t last too long and did test the new door seals – so far so good!

Whilst here, we couldn’t not visit Barry. Even though I knew Barry Island was in fact not an Island, I had to check. Definitely no island, but a nice little beach. Another local lunatic here I expect… Reminds me of my Father. 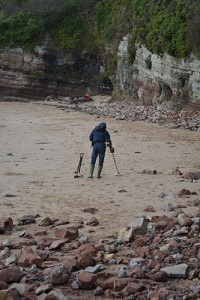 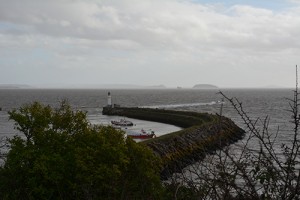 A brief visit to Cardiff suggested that it’s mobile phone mast central, so after a quick re-fuel, we decided to head North towards Elan Valley. Not without a quick snap of the BBC Wales studios of course… 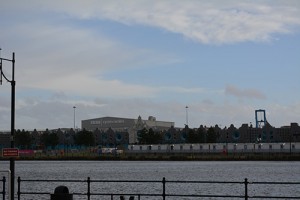 Oh, and we spotted a TARDIS.

By now we’ve seen enough of the coast and decide to go in-land and head towards Elan Valley for the remainder of our visit to Wales (this plan is subject to change!) En-route, via the Brecon Beacons… 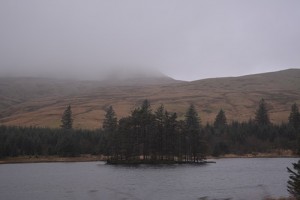 Now I’m a pro at setting up the satellite (yeah, right) – we stopped for a couple of hours on the Brecon Beacons, set up the dish and wrote/uploaded this Blog.

What have we learnt so far…

Setting up the satellite takes practice and it can’t be done everywhere! Internet and phone is basically “as and when” rather than on tap wherever we stop.

Always fill the water tank as the first job of the day, don’t leave it until the evening!

Make sure the van is level for sleeping. Rolling to one side isn’t so bad but sleeping with your head pointing downwars is a receipe for an awful night sleep!

Be prepared that the first choice of night location may not be suitable. Leave enough time to move on if needs be.

In stormy weather, the best places to park up for the night are sheltered. Otherwise, point nose first into the wind.

Top up the water tank at every opportunity. Even if we’ve only used a bowl full.

Bring enough things to do for each evening – don’t rely on there being an internet connection!!!!!

Write the Blog as we go, no less than each evening, even if it can’t be uploaded until later. Photos could do with being bigger than in this post and my content is possibly full of waffle….!