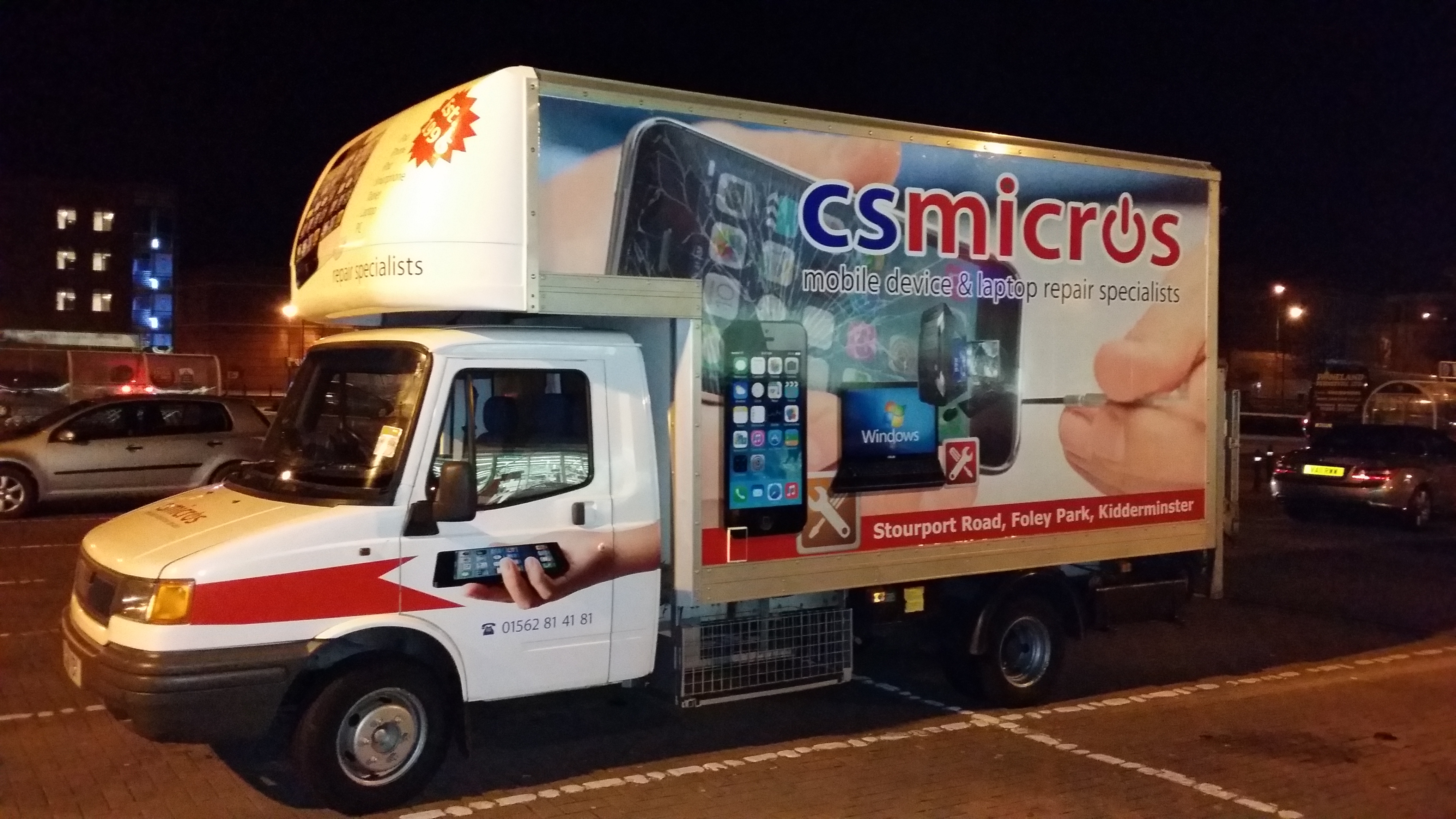 I bought this LDV Convoy Luton back in 2009. Since then it’s been converted several times for various purposes. Digging through the photos on my computer, I’ve found various stages of most of the van’s uses. Here is the history of a van that is, Beyond The Van.

Edit: Put the kettle on, make a cuppa, this is longer than I predicted…!
Edit II: I’ve put small photos on here but if you click them, you get the full size ones. Then just hit back.

February 2009, my business is computer repairs and back then I operated mobile. I had a mobile office/workshop trailer which I towed to site daily with my Discovery. Hitching up and towing twice daily was a chore, and the trailer itself was showing its age. What I needed was… a…

I could imagine jumping into my mobile office/workshop and just DRIVING! No hitching up or towing. It’d be perfect. A Luton box van has loads of space and potential. So, my Father and I set off in search for a Luton. The criteria was simply that, a big Luton van. We’d not thought about makes, ages or actually anything else. We found some ex-rental Lutons advertised somewhere off the M6 north of Birmingham and off we went to have a look. Two similar vans were on offer, both with tail lifts and both the same price. We picked the one with least signs of use, paid our (his) money and I drove off in what at the time was the biggest vehicle I’d driven. My 2001 LDV Convoy 400 LWB Luton.

Who? Never heard of them enough to have taken any notice. All I knew was this was a 2.5 Turbo Diesel. It was basic, but I’m happy with basic. I drive a 1988 Defender as my daily car, trust me, I know what basic is. The closest match in my mind to LDV was Leyland; it did sort of resemble a Sherpa.

Of course, I soon found out that this van is basically powered by a Transit engine, gearbox and probably running gear too. It’s the 2.5 Ford “Banana” turbo diesel engine. This was superseded in later models by the Ford 2.4 Duratorque engine. I’m told my engine is a pretty basic and tough beast. It is proving that way!

So, it’s noisy, but quieter than a Defender. It happily sits at 50MPH, will do more if it has to but by no means comfortably. The windows wind down with a handle and you have to reach across to unlock your passenger’s door. I like this van.

My Father and I worked hard and quickly to get the van converted. Once up-on a time, he had been a carpenter & joiner. With this project, he told me how to do the woodwork and I did it, and learnt. 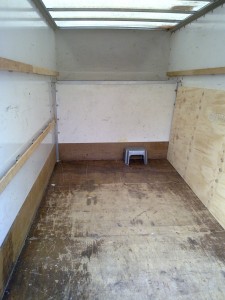 Starting off as an empty furniture van. 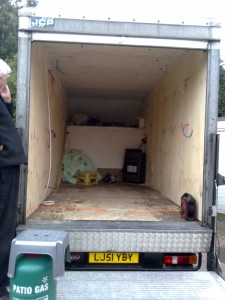 We made walls and a ceiling. I wanted walls strong enough to screw computer monitors, etc. straight on to. Se we used 18mm roofing board all round. I hear you cringe, and so you should. You’ve probably already worked out what the big problem we eventually faced. We certainly hadn’t worked it out yet. 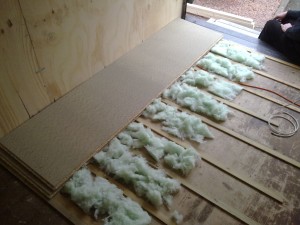 And then a floor. Just as the walls are, the floor was fully insulated too. We used flooring chipboard here. 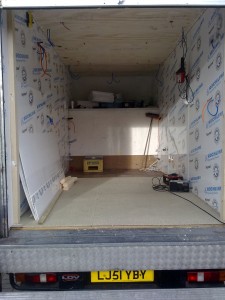 Covered all the timber with plastic wall boarding.

And then I completely forgot to take any more photographs! As usual. We carried on, adding UPVC double glazed doors to the back of the van, work benches, desks, etc. 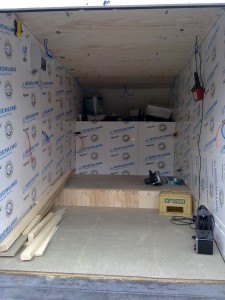 We raised half the floor to accommodate a large battery bank and other gadgets. The higher level was going to be the “office” and the lower half the “workshop” and customer area. Eventually, it took shape… 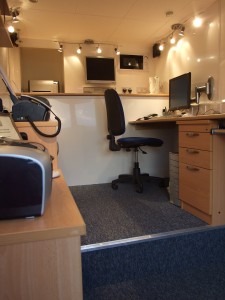 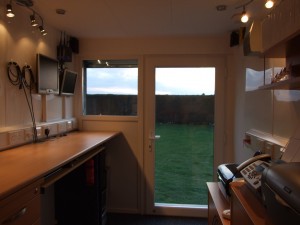 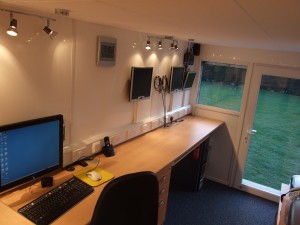 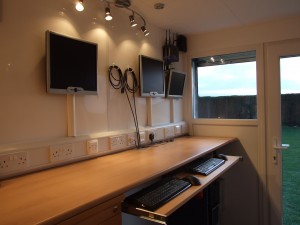 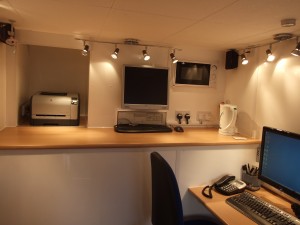 I was delighted, it looked brilliant and I’d done it myself. It was ready for the sign writing, and then to start work.

Yes, you’ve probably worked  this out already. It’s a 3500Kg maximum gross weight van. That weight has to include the van itself, Luton body, tail lift and contents. Not anymore. The van was hugely overweight and therefore illegal to drive. I’d never converted a van before, I had never considered weight. It adds up very quickly though, to well over 4000Kg! What could I do?

After a lot of research, we found a knowledgeable company who knew how to solve our problem. They could uprate the vehicle, provide all the necessary certificates for DVLA and it can be re-categorised as 4500Kg. It wasn’t a cheap upgrade but it did sort the problem out. New suspension meant the rear leaf springs were no longer bending the wrong way (yes, they actually had been!) and uprated brakes meant it could stop properly. Other changes were made to the vehicle but I can’t remember the details. The company who upgraded it did say it’s actually safe for over 5 tonnes but changing it with DVLA to 4500Kg would be more straight forward than anything higher. The changes were inspected by DVLA and it was re-categorised as a Private HGV with maximum weight of 4.5 Tonnes.

The paperwork came back all accepted and official with an added bonus… cheaper road tax! 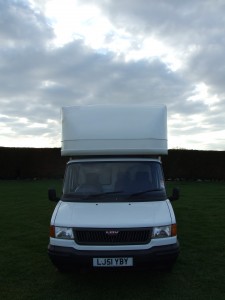 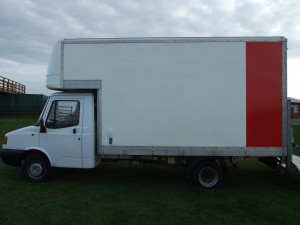 I got stuck into the sign writing and it was ready for work pretty quickly…. 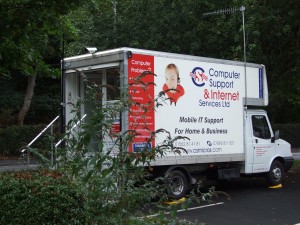 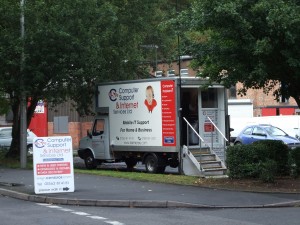 It was the largest vehicle I’d sign written, that’s for sure!

We had aluminium steps with rails made for customer access. These hinged up and travelled between the roller shutter and tail lift.

The van was everything I wanted it to be. But not for long.

The business expanded and my personal circumstances changed. We needed more space, and so took on a commercial unit. The van was redundant.

It stood unused for months, possibly years. Tucked away in a corner behind my unit. I couldn’t bring myself to sell it, I loved it! Knowing it was there also gave me peace of mind in case the premises didn’t work out.

It was never used again for the purpose it was converted.

I basically adapted what was already converted, into something I could live in. I added a shower, sink, porta-loo, etc. Also of course, a bed – above the cab! 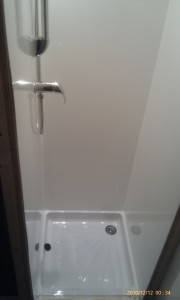 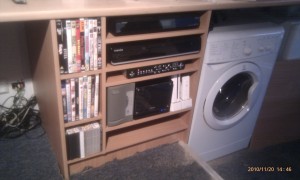 Not forgetting a washing machine, of course!

My little home on wheels rarely moved, but it served it’s purpose. It was comfortable, warm and gave me the opportunity to get back on my feet, which I did. After which, the van was redundant, once again.

Times changed and the computer repair business became about as lucrative as an Ice business in a Frozen land. I started buying and selling furniture to keep the business going, and needed… a Luton van! My van wasn’t being used and I couldn’t see any likelihood of me needing it as a home again, so Kirsty and I stripped it completely, right back to a bare Luton van. Here was my furniture van, and we sure did some miles! 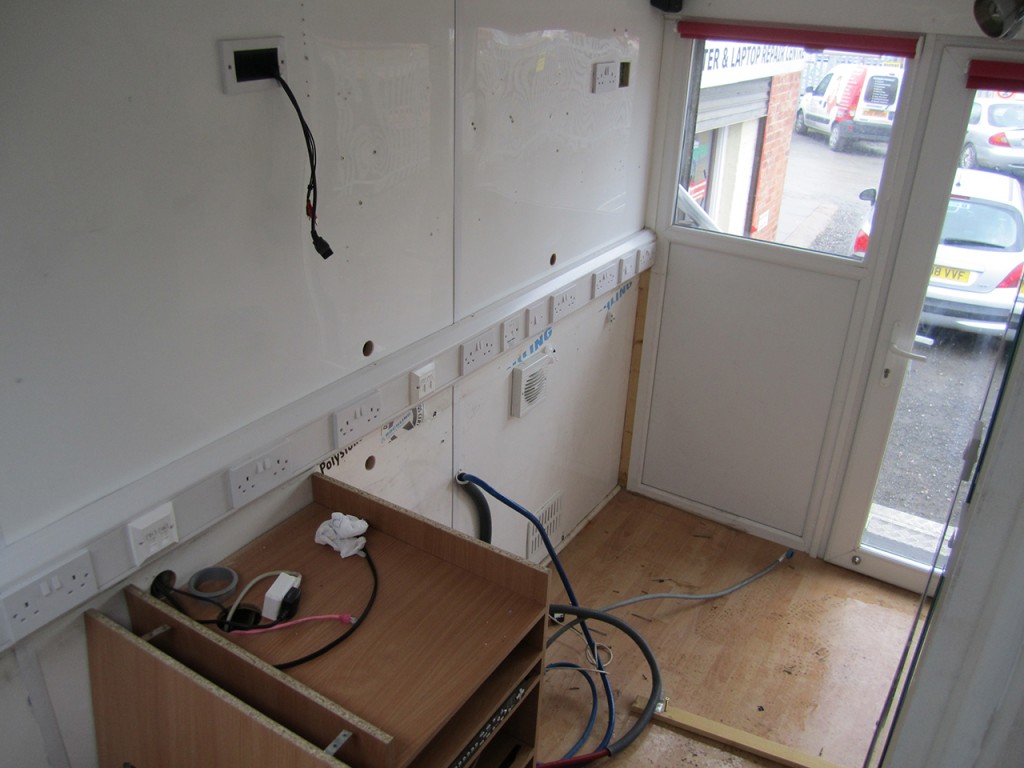 Dismantling it all was a massive job! The van was 5 inches higher at the back once everythig was taken out! 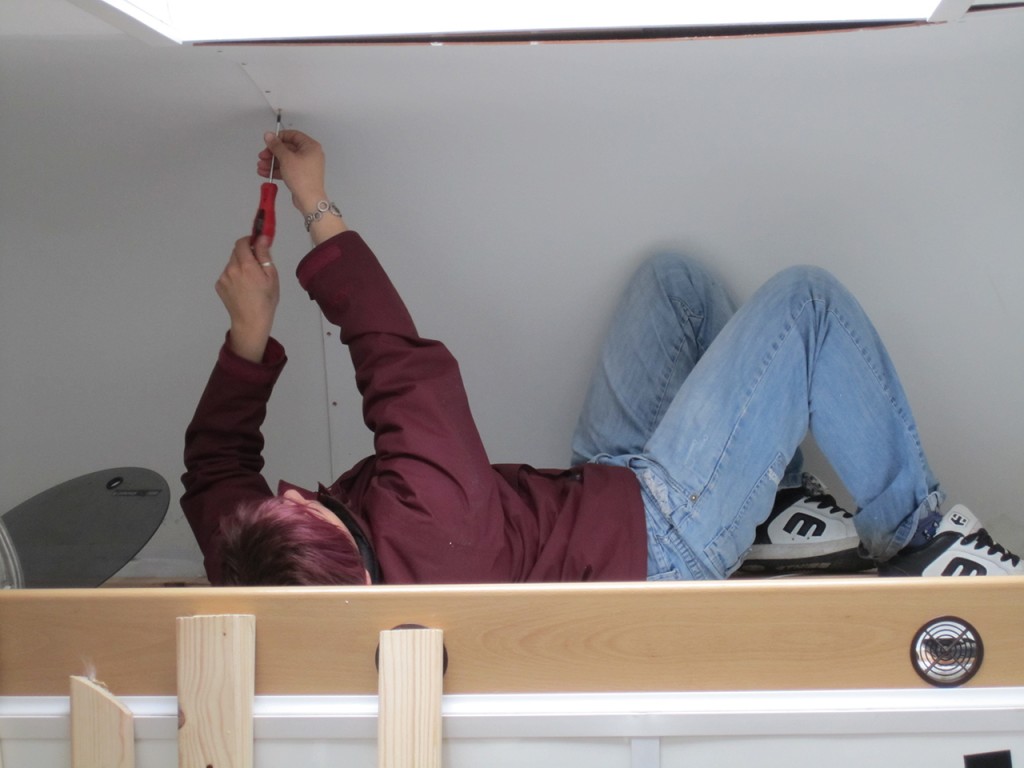 A little heart-breaking, if I’m honest!

Once again times changed with the business and an opportunity came along that I could only have dreamt of until now. The premises I’d always wanted were in the offering to me.

The van was brilliant for moving premises, as a tail lift Luton would be! After the many trips to B&Q, the van was no longer needed once the premises were refurbished. Time to sell the van?

I planned to. I even wrote up the eBay listing. But I couldn’t bring myself to sell this Luton. I loved this van, but it was just sitting in a public car park. So I replaced all the sign writing with something really eye-catching, and it was a giant advert for my business, right next to busy traffic lights in the carpark! 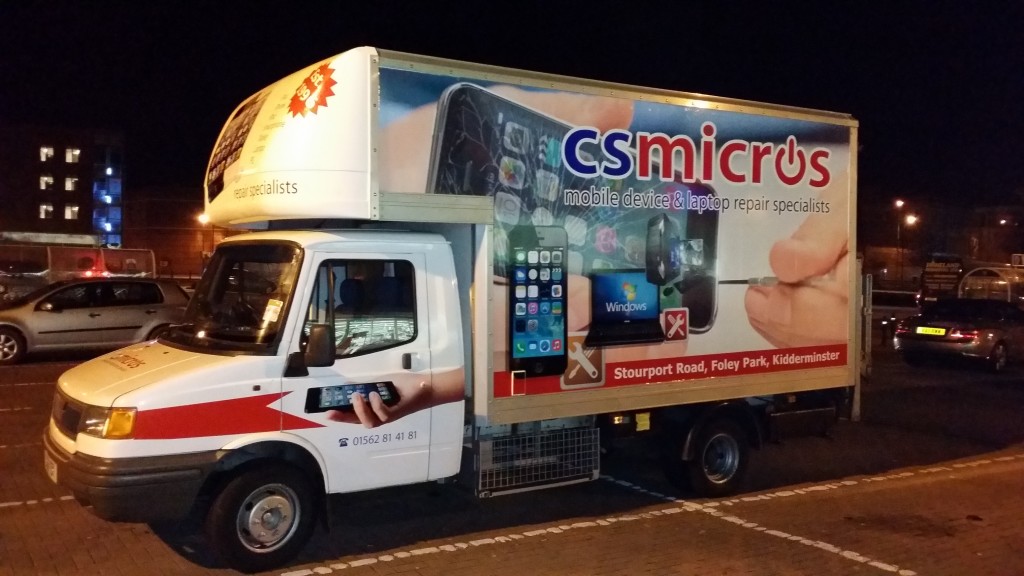 Needless to say, this latest sign writing effort took some work, but you couldn’t miss it. The old Luton looked like new.

It looked like this and worked hard at being an advert that never moved for around 2 years. After which, I think it blended into the surroundings and didn’t get much notice. Other than from kids wanting a selfie in front of a giant iPhone.

A new lease of life

My health deteriorated dramatically and I had to completely change my life in order to recover and become myself again.

I was going to make us a log cabin on wheels. My dear old Luton, it’s your time to shine once again. 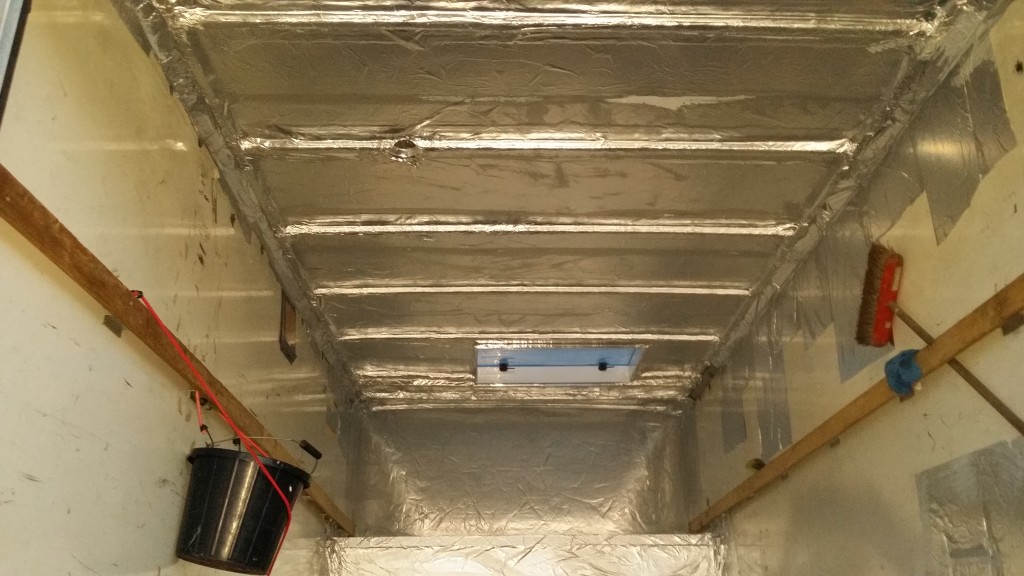 I lined every inch ofthe inside with aluminium, Kingspan and various other insulating materials. 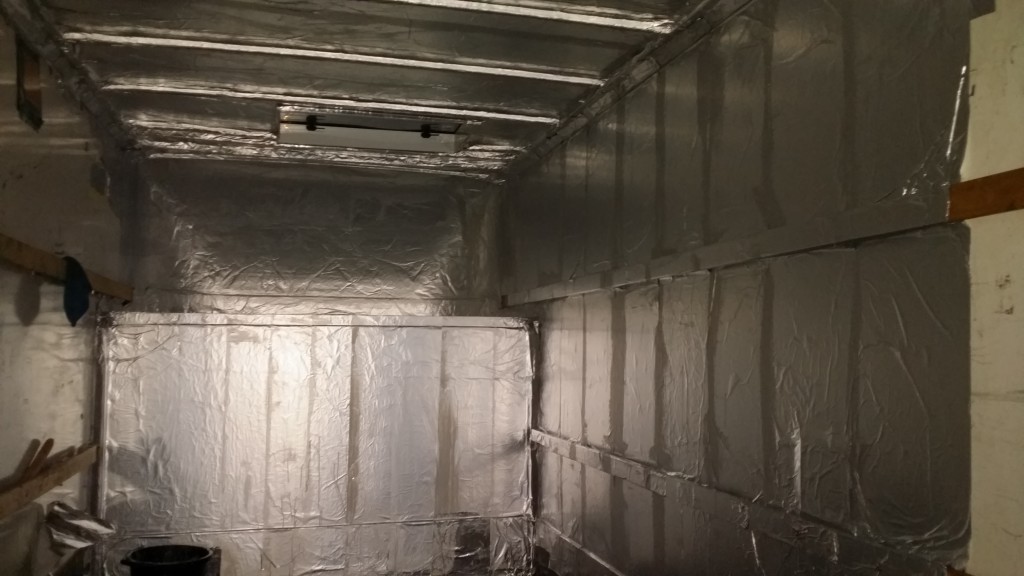 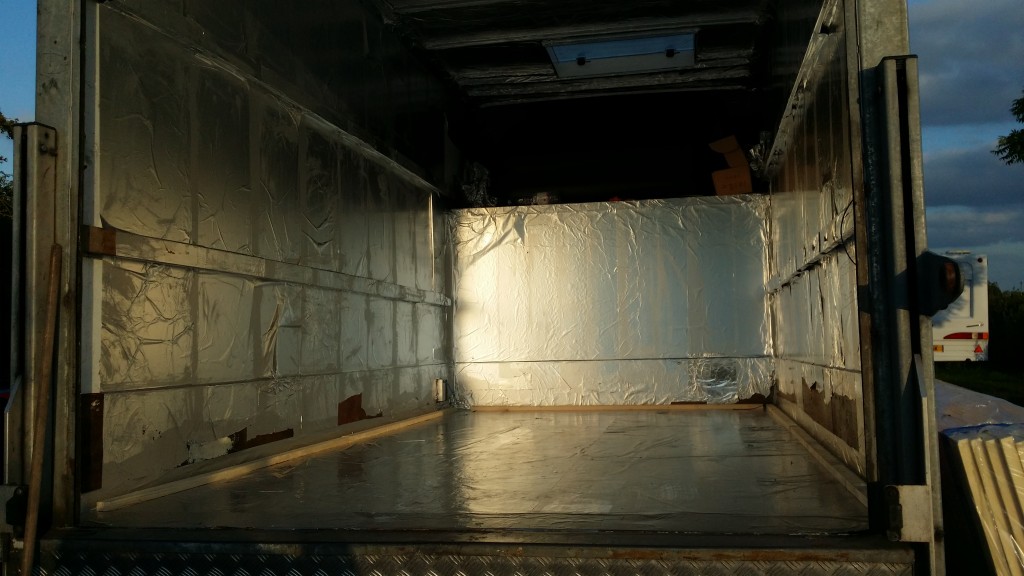 This took quite some time. I got there though, by the time I had finished, every bit of the inside was lined. The aluminium actually does a couple of things: 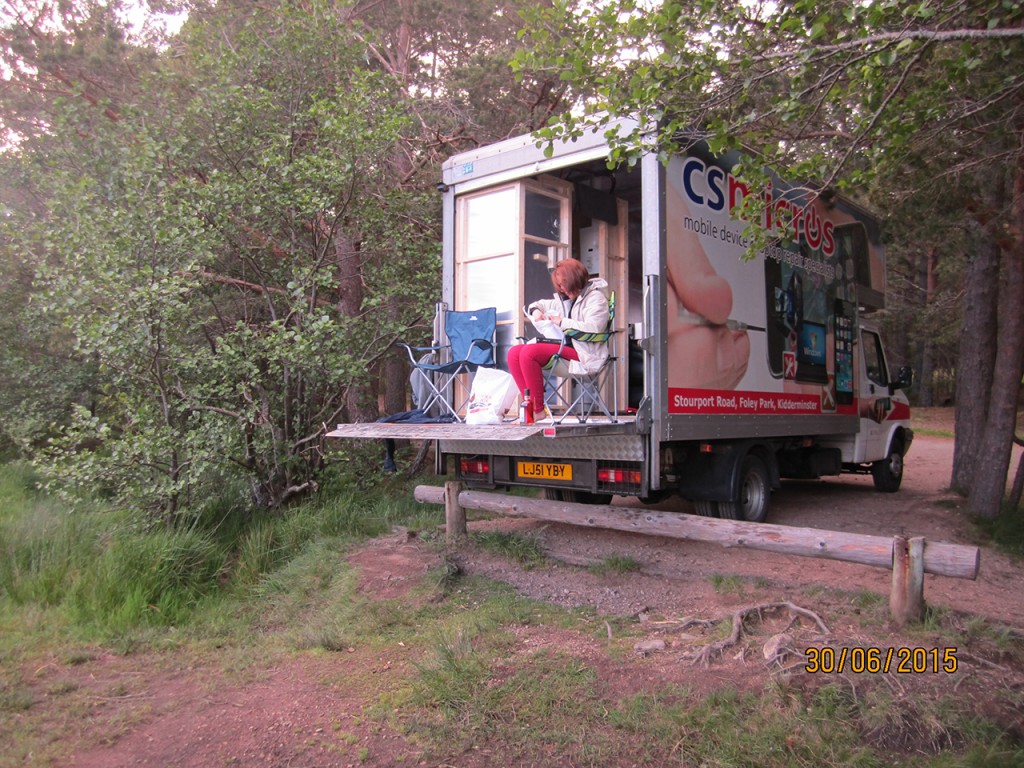 I built the shower and toilet in June 2015, then we chucked a mattress above the cab and went touring Scotland for a week. Over 1750 miles later, the Luton hadn’t missed a beat. Now we were back, I was full of new ideas for the new camper, including utilising the tail lift as a balcony! Over the next six months, I worked almost full time on the van… 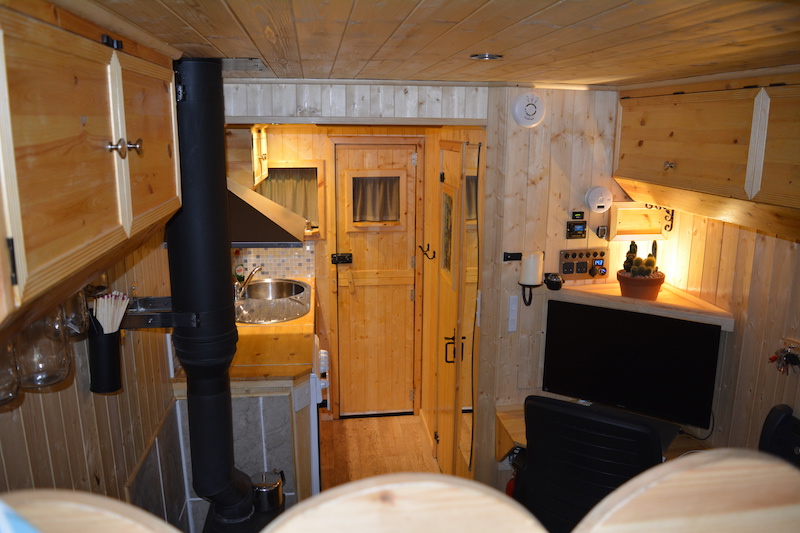 Did I mention I did the entire conversion in the middle of a field? No mains electricity, just solar panels and elbow grease.

We used each stage of the van as I built it, such as the shower, office, kitchen, etc. This was a great test to make sure things were done the way we needed, and no unpleasant surprises (like a leaking shower or chimney!).

In October, the caravan and Luton swapped roles. The Luton became where we lived, and the caravan became the wood and tool store.

Boxing Day 2015, we headed to Wales with almost 4500Kg of motorhome! See Blog

I do regret one thing. One big thing. I wish I had taken photos along the way. I’m AWFUL for not taking photos. I see what I’m making in my mind, and make it. I don’t stop to think about taking photos!

I am getting used to pausing and taking a snap. In my head as I go along now, I’m writing the Blog. After just a couple of Blog posts, lots of people have subscribed and are finding it interesting. This is awesome, just what I need to motivate myself to take the photos and do the writing. Thank you to our followers. 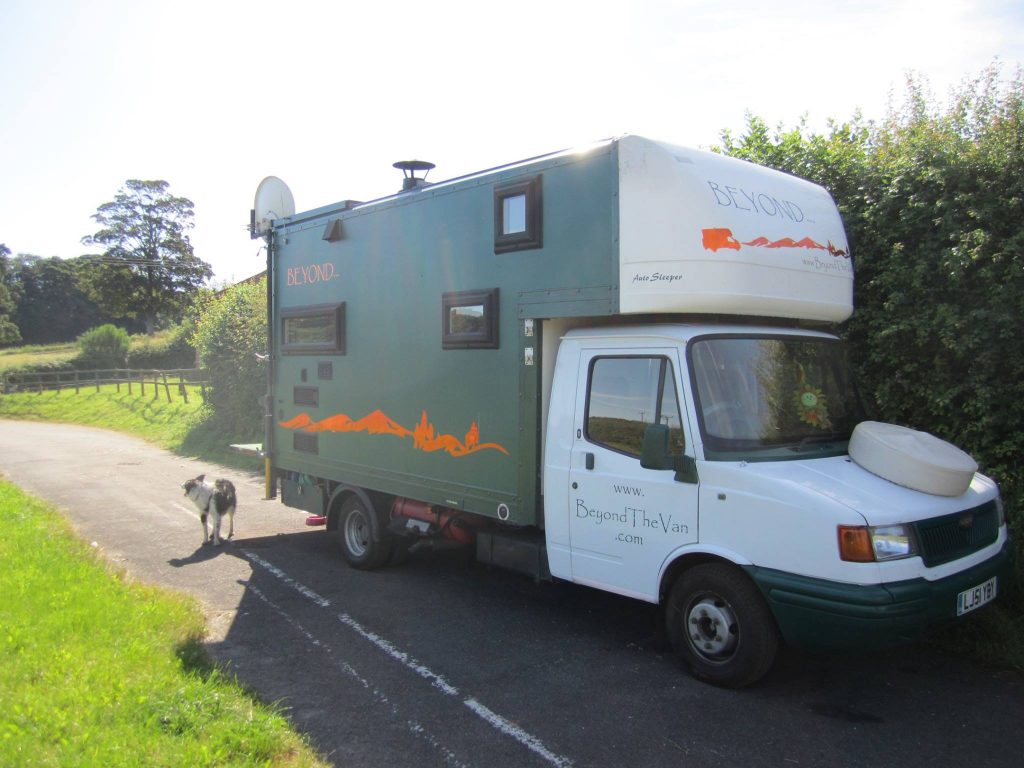 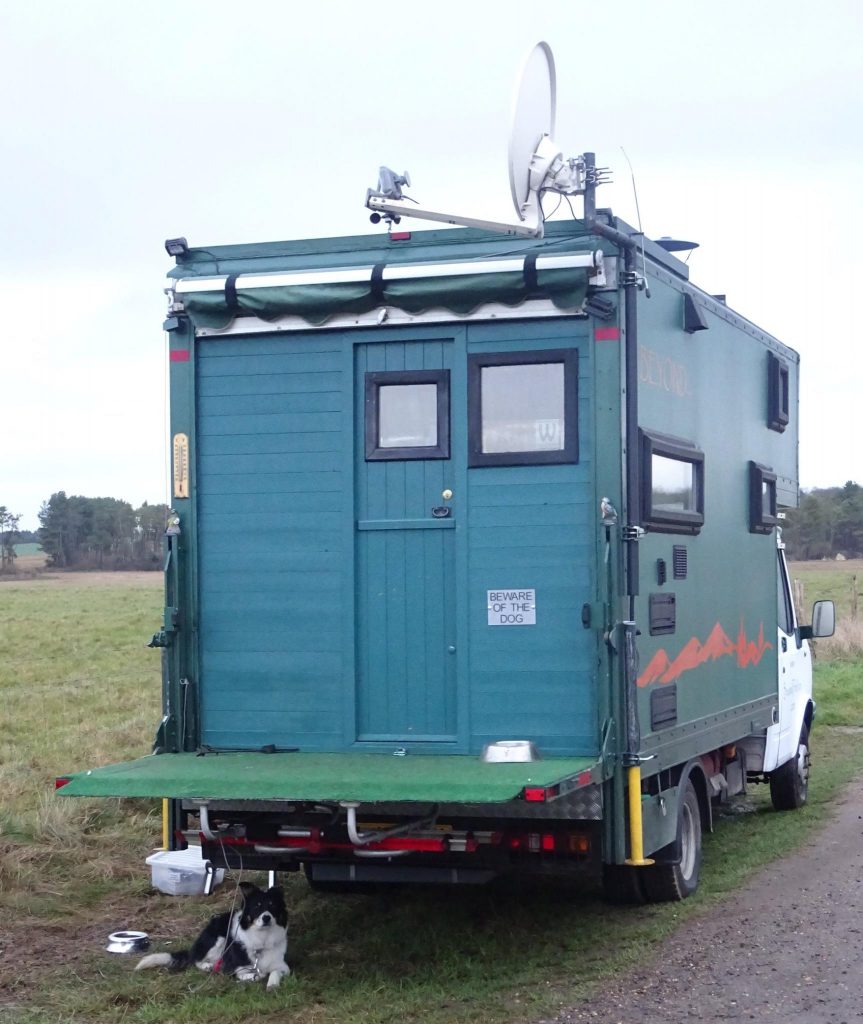 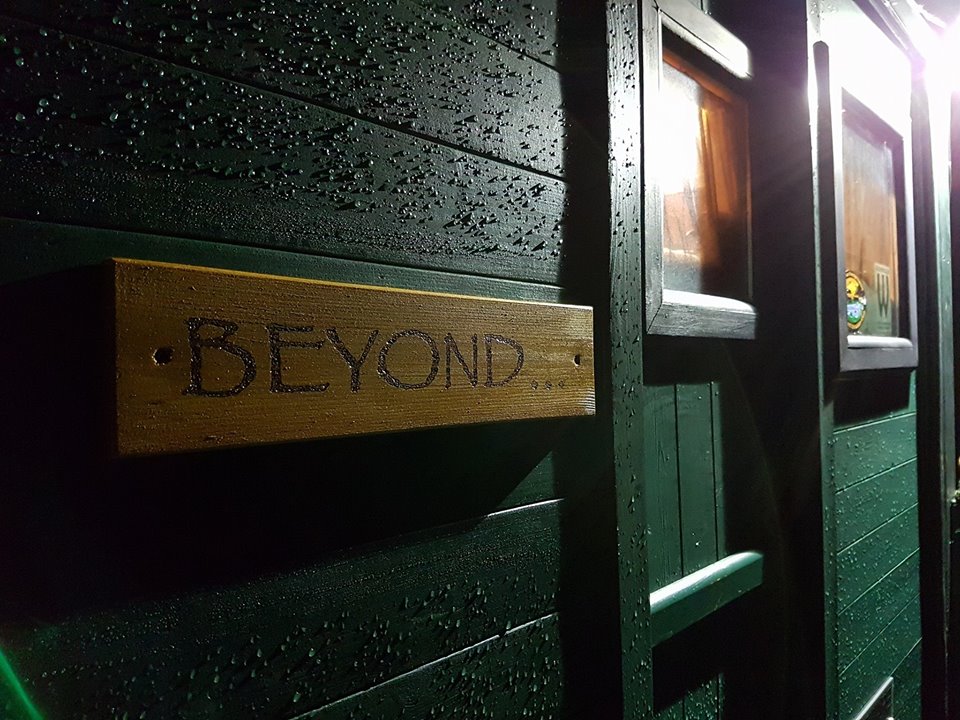 I’m really pleased how it’s turned out. Would you know it’s the same van…?

So as you can see, my faithful old Luton isn’t just any van, it’s…